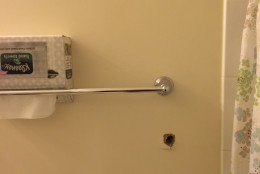 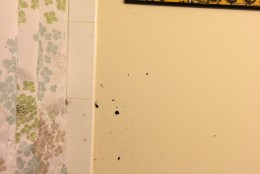 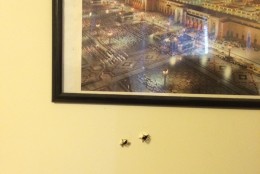 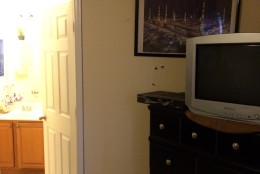 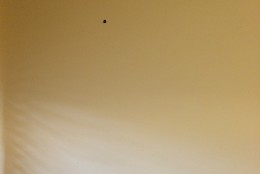 UPPER MARLBORO, Md. — A mother of two small children couldn’t believe her eyes after a shotgun blast ripped into the walls of her town house in Upper Marlboro last week.

She says her 3-year-old daughter had just left the room where the blast struck.

“I heard a loud noise and … it sounded like a blast,” says 30-year-old Uzma Khan. “I went into the bedroom and saw the bullet holes and I was shocked,” she says.

A Prince George’s County police report says a neighbor cleaning a shotgun in his home in the 8800 block of Great Gorge Way in Upper Marlboro on the morning of Jan. 14 accidentally fired it.

There’s a gaping hole in the wall of the master bathroom. The blast then punched multiple holes into the facing wall and passed into the bedroom splattering on the wall above the bed.

“I cannot even go into my room because I cannot get the picture [out of my mind] of my kid standing there, because they could have been shot, especially my daughter who was there with me 10 minutes ago,” Khan says.

The police report says the neighbor has apologized, moved the gun to his mother’s house and offered to pay for damages.

On Monday, Prince George’s County police say no one is available to answer questions about the incident, which they say is being “handled” by detectives.

Khan says the alarming incident has sharply raised her awareness of the dangers of firearms and the risk of deadly accidents.

“You’re not a killer, you’re not a murderer, you don’t want to take anybody’s life, but you could have done that,” Khan says.