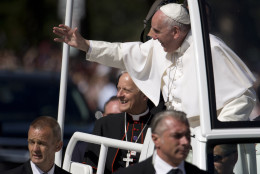 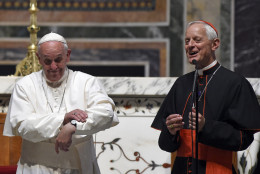 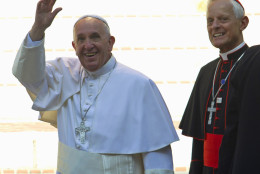 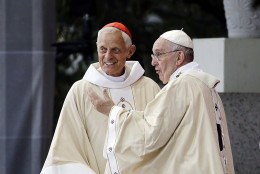 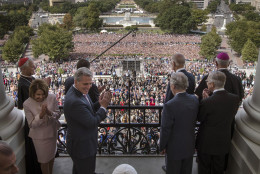 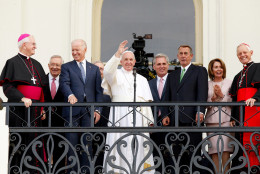 WASHINGTON — It’s probably not surprising that, for Cardinal Donald Wuerl, archbishop of Washington, riding in the popemobile with Pope Francis was “a lot of fun.” But he tells WTOP that he loved the quiet moments of the pope’s visit best.

The ride past the cheering crowds during the parade around the White House, and at the Mass at the Basilica of the National Shrine of the Immaculate Conception, were exciting, Wuerl says.

In the open popemobile, Wuerl says, the roar of the crowd was such that “we couldn’t even talk to each other.”

But afterward, when the cardinal and the pontiff were in the little Fiat that last week became as much of a papal icon as the converted Jeep, “you got to see and understand this wonderful human being,” Wuerl says.

“He is every bit as real and authentic one-on-one as when he’s in that popemobile. There is nothing different about him.”

Francis flashed some humor during his visit as well: Heading up to the seminary, Wuerl recalls, the seminarians “are all cheering and shouting, and I said, ‘Holy Father, they don’t do that for me.’ And he said, ‘They didn’t do that for me when I was in Buenos Aires.’”

Francis’ itinerary in the District, as well as in Cuba beforehand and New York and Philadelphia afterward, was pretty much nonstop, and the pope is 78 years old. But Wuerl says the welcome re-energized him.

“He has incredible energy,” Wuerl says.

“ … He just goes and goes, but he gets a second breath every time he’s with another group.”

Every time he left or went back to the Vatican Embassy, on Massachusetts Avenue, Wuerl says there were “kids from the schools, cheering him. And he, of course, went to that railing and walked and greeted all of them.”

Every time they encountered another crowd, Wuerl says, Pope Francis asked him, “These people have waited, haven’t they?” – a coded acknowledgment, the cardinal says, that the pope realized how long people had been waiting and felt obligated.

“I can’t tell you how many people have said to me, ‘I made eye contact with him!’ And I say ‘Yes; you probably did.’”

Even at the tail end of his visit, at a lunch at St. Patrick’s downtown after having addressed Congress, Wuerl remembers, the pope saw another group of people straining to get a glimpse.

“His whole complexion changed. He just lit up again, and security said to me, ‘There’s no stopping him now.’”

Pope Francis had three major impressions of D.C.: “He was so impressed with how beautiful it was — how green it is,” Wuerl recalls; he was also overwhelmed by the reception — “not just from the crowds, but everywhere he went,” and he noticed that “here, the church is very much alive in the spirit.”

Wuerl recalls the faces of the crowds, and thinking that “looking at those faces, you saw a slice of the whole world. We forget — here in Washington, we really do have the face of the world. Everybody is here.”

One moment of the pope’s address to a joint meeting of Congress also struck Wuerl. When Francis began to recite the Golden Rule, and the assembled lawmakers rose to their feet, joined the pope at the end of the recitation and cheered. The moment was compelling on TV, but Wuerl says it meant even more in person.

“We know what we’re supposed to be, and do. We know the standard we’re called to: Do unto others as you would have them do unto you. But when he says it, in a way that reflects how he lives it, it takes on a fresh meaning. … When he said at the Mass, … ‘Remember that God loves you, and you’re supposed to show that love and mercy to everybody,’ it’s not new. But when he says it, and you know how authentic he is, it rings fresh all over again.”

Now, the question is whether lawmakers, and everyone in the area who was so enchanted by the pope, will take his words to heart: “And wouldn’t it be wonderful if that were the legacy of the visit of Pope Francis? That we take seriously what he said?

“I loved riding around through the city and seeing everybody so happy, but now that he’s gone back to Rome, let’s see if we can continue to generate that.”