Ethan Gick completed 12 of 17 passes for 241 yards and a touchdown, and rushed 25 times for 161 yards and three touchdowns, to lead Tuscarora to this week’s Virginia 4A Region C final against undefeated Broad Run.

When it comes to the Tuscarora (Virginia) football team, head coach Brandon Wheelbarger considers it an honor to wear jersey No. 1.

Ethan Gick has been a leader, regardless of where he lines up on the football field. In the past, he has started games at quarterback, wide receiver and free safety — pretty much wherever the Huskies have needed him.

This season, though, Gick has mostly played one position – quarterback – and led Tuscarora to this week’s Virginia 4A Region C final against undefeated Broad Run.

This past Friday, Gick completed 12 of 17 passes for 241 yards and a touchdown, and rushed 25 times for 161 yards and three touchdowns, as the Huskies beat Liberty, 53-22, in a Virginia 4A second-round game.

For his efforts, Gick was named the Military Bowl DC Touchdown Club High School Football Player of the Week.

Tuscarora has enjoyed plenty of recent success, advancing to the state semifinals three times in the past five years. As a sophomore, Gick was a backup quarterback and played some wide receiver. That offseason, he focused on playing wide receiver, only to move back to quarterback for half the season when starter Justin Allen (now at Elon University) broke his wrist. Gick also started on defense at free safety and then moved back to wide receiver once Allen was healthy.

This year, it was back to quarterback, where Gick has shined, completing 68% of his passes for 2,013 yards and 20 touchdowns with just four interceptions, while also rushing for 1,234 yards and 17 touchdowns.

He was named All-Dulles District first-team as an all-purpose player and second-team as a quarterback.

Wheelbarger said that Gick is the team’s best safety, though he tries to limit the senior’s playing time to only on offense.

Gick, who is 5-foot-11 and 190 pounds, has received recruiting interest from Ivy League schools, while his twin brother, Noah Gick, who is a 6-foot-3 and 260-pound lineman, holds several scholarship offers, the latest coming from William & Mary last week.

The Gicks and the rest of the Huskies (11-1) have won 11 consecutive games since a 28-26 season-opening loss to Broad Run in the teams’ first meeting this season.

Old Mill RB Joey Graves rushed 19 times for 125 yards and two touchdowns as the Patriots beat Parkville, 34-13, in a Maryland 4A quarterfinal.

Coolidge WB-DB Jabari Johnson caught a touchdown pass in overtime, and made six tackles and forced a fumble on defense as the Colts beat Anacostia, 8-6, in double overtime in the DCIAA Gravy Bowl.

Catoctin RB Carson Sickeri rushed for 281 yards and six touchdowns as the Cougars beat Fairmont Heights, 41-21, in a Maryland 1A quarterfinal.

Quince Orchard RB Marquez Cooper rushed 19 times for 243 yards and four touchdown, as the Cougars beat Arundel, 69-32, in a Maryland 4A quarterfinal.

Yorktown QB Grant Wilson completed 22 of 30 passes for 241 yards and two touchdowns as the Patriots beat Madison, 25-10, in a Virginia 6A second-round game.

Wise LB Bo Wright had seven tackles and two sacks as the Pumas beat C.H. Flowers, 35-6, in a Maryland 4A quarterfinal.

Freedom-Woodbridge WR Umari Hawkins caught seven passes for 111 yards and three touchdowns as the Eagles lost to Massaponax, 45-42, in a Virginia 6A second-round game.

Huntingtown DL Victor Powell had three sacks as the Hurricanes beat Wilde Lake, 35-0, in a Maryland 3A quarterfinal game.

Good Counsel RB Sy’Veon Wilkerson rushed for a touchdown and turned a screen pass into a 55-yard gain in the final minute to set up the game-winning field goal as Good Counsel beat St. John’s, 16-14, in the WCAC championship game.

Vote in the poll below to choose this week’s WTOP DMV High School Football Game of the Week, presented by The St. James. Voting closes at noon Thursday. 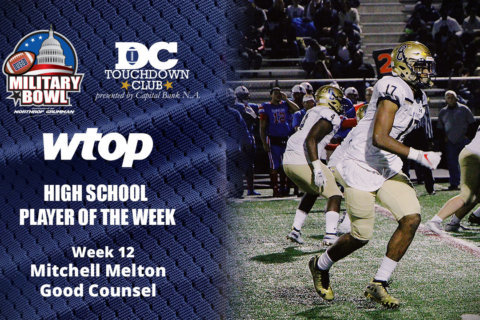