What do you do after finishing seven marathons on seven continents in seven days in record time? If you're Mike Wardian, you keep running.
Listen now to WTOP News WTOP.com | Alexa | Google Home | WTOP App | 103.5 FM
(1/7) 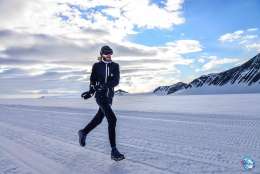 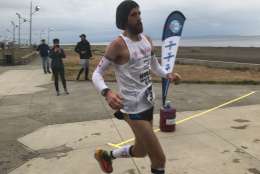 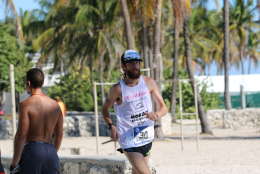 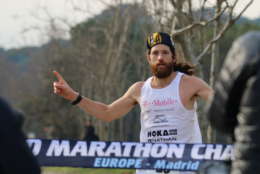 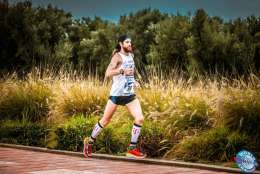 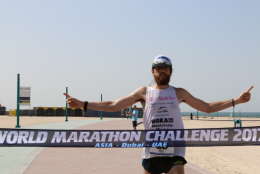 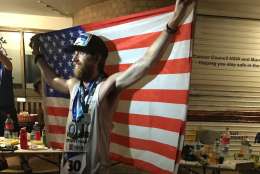 WASHINGTON — You wouldn’t think that a champion marathoner and ultra-runner who just set a mind-boggling world record would find himself falling behind very often. But right now, Mike Wardian’s got some catching up to do.

Sitting at his desk in the bottom level of a brownstone along Embassy Row in Northwest D.C., where he works for an international shipping company, Wardian is dressed for the part: white, dri-fit T-shirt full of sponsor logos, black web-footed running shoes. The shirt hangs loose on his spare frame, his arms skinny but wrapped in a tight sheath of muscle around the bone. He sits at his desk, a giant map of the world on the wall behind his double monitor.

In addition to his job, Wardian is also a husband and father of two. But in his spare time, he runs the craziest races on Earth and, if all goes well, wins them. Sometimes, he sets world records.

He has just returned from the World Marathon Challenge, which might be the most understated name for any sporting event in existence. It consists of seven marathons, run on seven consecutive days, on seven different continents. It’s worth taking a moment to really let your brain process what that entails.

First, the 30-some-odd souls with the means and psychological makeup to register for such an experience needed to get themselves to Punta Arenas, Chile, by Jan. 17. From there, a 4.5-hour flight aboard an old windowless, Russian military-style craft took runners and officials to Union Glacier Camp in west Antarctica. From there, it’s back to Punta Arenas, then to Miami, Madrid, Marrakech, Dubai and finally, Sydney.

At each location, Wardian and his fellow competitors run 26.2 miles, but not through some scenic course in a blocked-off city. The routes are compact circuits or out-and-backs, adding another taxing mental hurdle. It’s even worse when, like Wardian, you’re running on precious little rest.

“I just didn’t sleep,” he said. “I slept like 16 hours over the course of the entire week. I was just so wired from every day; I couldn’t shut myself down.”

Far from a normal race routine, immediately after finishing, racers were bused to the airport to embark on the next leg. They flew in an older plane with business class seating that reclined, but didn’t lay all the way flat. Wardian — who has trouble sleeping anyway, getting around four hours per night — says he tried to meditate or read, but spent far more time trying to sleep than actually doing so.

“That was actually one of the toughest things,” he said of the travel schedule. “Usually when you do a stage race, you’re not doing the travel. You’re running to the next stage and staying there.”

Coupled with the lack of rest, one might think the refueling process for a body under this kind of repeated, high-level stress would entail a mammoth haul of calories. But for Wardian, already a vegetarian, the intake is surprisingly spare. One night on the trip, when he couldn’t sleep en route between Marrakech and Dubai, he tracked everything he ate between races. 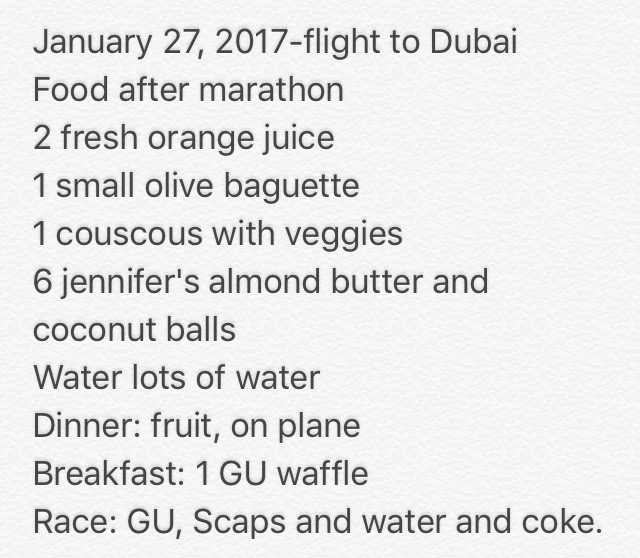 Despite the modest diet and lack of sleep, Wardian says he didn’t lose any weight on the journey. That means he still weighs between 138-142 pounds.

“If you look at me, I feel like I just got leaner, more defined,” he said. “Any excess is just gone.”

In addition to the sheer mileage and travel, the jet lag and fatigue, the shock of being transported all around the planet is insane. It’s winter up north, but it’s summer in the southern hemisphere, creating dramatic climate swings across the collection of races. Temperatures dipped as low as -30 Celsius in Antarctica and soared as high as +30 Celsius in Dubai. That’s a range of -22 to 95 Fahrenheit, nearly a 120-degree spread. As the final leg was being run in Australia, it was still 85 degrees at 1 a.m., nearly identical to the heat that wreaked havoc on the Chicago Marathon in 2007, sending 185 runners to the emergency room.

Wardian, of course, is no ordinary marathoner. Even now, back at work in D.C., he is getting in several workouts each day, running to and from the office (6-8 miles each way, depending on the route from Arlington) and over his lunch hour. And unlike many novice distance runners, he wasn’t exactly tapering off before his trip around the world.

“A week before the World Marathon Challenge, I did a six-hour race in Florida on the way to the thing,” he said. “Did over 80K, or 50 miles.”

Much is made of the rest and recovery needed to run effectively over such distances, but Wardian’s approach flies in the face of that conventional wisdom. Perhaps that’s why he was able to do what he did, running all seven marathons in under three hours, averaging 6:20 miles along the way.

“It’s kind of a dumb mindset, maybe, but I just don’t care what happens the next day and I’m able to just focus on what’s in front of me,” he said.

That helps explain what Wardian did upon finishing the final race in Sydney. He didn’t collapse or fall fast asleep or need to be carried from the line.

“They interviewed me for a couple minutes, I don’t know, about five minutes, then I changed into my Elvis outfit and I did two laps in the Elvis outfit cheering people on,” he said.

Then he went and ran another 17 miles so that he could top 200 for the week. Yes, really.

It’s hard to pick the craziest part of a journey like this one, but one story of Wardian’s stands out. Upon landing in Antarctica, he met a group of British reservists who had just spent the last 68 days trekking 1,150 miles across the frozen continent and had reached the camp. There was a race being run — a marathon, mind you — so they figured, why not join in? One of them, who had never run a marathon before, finished fourth, in under three-and-a-half hours.

Antarctica is also where Wardian says his favorite moment of the journey occurred, the point where he realized just how lucky he was to even have the opportunity to be a part of it all. On his second of four circuits around the loop in Antarctica, running out front, he saw the sun break through from behind the mountains.

“There was a huge cloud with holes in it just shooting out sunbeams,” he said. “It was one of the most beautiful sights I’d ever seen in my life. Even though I was running like 6:18 pace, I was like, ‘I need to remember this.’”

Experiences like that were what prompted Wardian to sign up in the first place. He only had a fraction of the money to go from sponsors when he committed to the race, but others stepped up along the way to help him cover costs.

“You just keep going out to people and you keep pleading your case and eventually, people see that you’re committed and dedicated,” he said. “I don’t know — I guess it’s infectious.”

Thankfully for Wardian, that was the case, given the heavy price tag. The total cost: 36,000 euros (nearly $40,000 in U.S. dollars) plus flights in and out of the start and finish areas.

“It costs almost as much just to get to Antarctica, so when you think about it that way, it’s actually a pretty good deal,” he said.

As long as you’re willing to run 170-some-odd miles.

His record run earned him USA Track & Field Athlete of the Week honors, as well as a Star of the Night from John Anderson on SportsCenter. So now that Wardian has achieved something most of us never even imagined was possible, he’ll probably take a few months off, right?

You’ll have to go to New Zealand to ask him. He runs the Tarawera 102K Ultramarathon Saturday.