NEW YORK (AP) — New York Jets wide receiver Jamison Crowder agreed to a renegotiated deal that will keep him with the team through this season, a person with direct knowledge of the decision said Monday.

Crowder was due to make $10 million in the final year of the three-year, $28.5 million contract he signed in 2019. Financial details of the renegotiated deal were not immediately available, but the Jets had been trying to get the 28-year-old receiver to take a pay cut — or otherwise possibly be cut.

The person spoke to The Associated Press on condition of anonymity because the team did not announce the deal. NFL Network first reported the new contract for Crowder, who will be a free agent after this season.

Crowder was a reliable playmaker in his first two seasons with the Jets after spending four years in Washington. He has 137 catches for 1,532 yards and 12 touchdowns in 28 games with New York.

Crowder also established himself as one of the league’s top slot receivers, but his price tag for this season was a bit too steep for the Jets — especially after they drafted Elijah Moore out of Mississippi in the second round in April. Moore, viewed by some as a successor to Crowder as the team’s primary slot receiver, has impressed coaches and teammates during offseason workouts. That gave the Jets and general manager Joe Douglas some leverage in asking Crowder to renegotiate his deal.

Coach Robert Saleh confirmed recently that Crowder was not attending the voluntary program while the the receiver and the team worked out some contract issues. Saleh expected Crowder to attend the Jets’ three-day mandatory minicamp, which begins Tuesday.

New York signed Corey Davis in free agency, giving the Jets a suddenly deep group of receivers that includes Crowder, Moore, Denzel Mims, Keelan Cole, Braxton Berrios and Vyncint Smith. That had some thinking that the Jets could cut Crowder — and save over $10 million on the salary cap — if he didn’t accept a new deal or pay cut. But Saleh insisted he envisioned the receiver playing for New York this season.

“Absolutely, Jamison’s definitely got a role here and we’re excited to have him,” Saleh said recently.

NOTES: S Marcus Maye, who signed his franchise tag in March, is also expected to attend minicamp despite he and the team still negotiating a contract extension. The team tweeted video of Maye posing for pictures during its annual media day, meaning the star safety is at the team’s facility. The 28-year-old Maye was selected the team’s MVP last season and he’s expected to be a big part of Saleh’s defense this year. 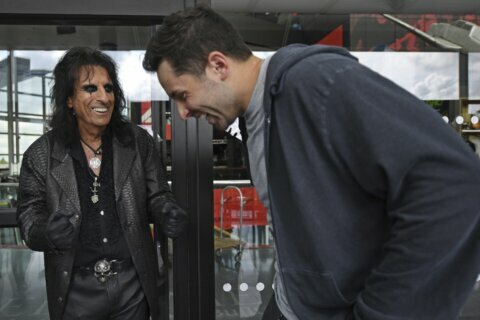