Goat yoga as the next fitness trend? We kid you not

It’s not uncommon to find yoga classes in D.C.’s breweries, ballparks and cat cafes. You’ll even find yogis practicing their down dogs in the iconic hallways of the Kennedy Center. But this spring, locals are taking their mats out of the city and into the fields for a new breed of yoga.
Listen now to WTOP News WTOP.com | Alexa | Google Home | WTOP App | 103.5 FM
download audio
October 7, 2022 | Forget the studio. Your next yoga class could be at a farm. (WTOP's Rachel Nania )

WASHINGTON — It’s not uncommon to find yoga classes in D.C.’s breweries, ballparks and cat cafes. You’ll even find yogis practicing their down dogs in the iconic hallways of the Kennedy Center.

But this spring, locals are taking their mats out of the city and into the fields for a new breed of yoga: goat yoga.

To clarify here, the goats are not the ones doing the yoga. At goat yoga, humans practice yoga in the presence of goats. 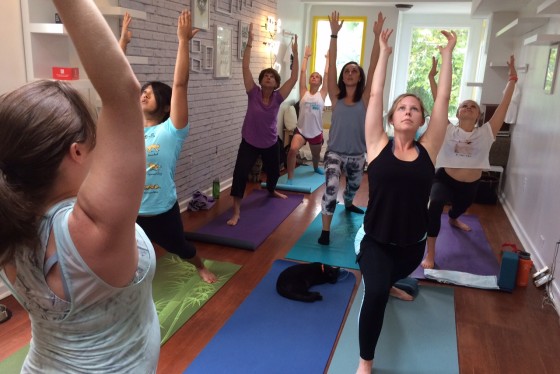 Purrfecting your down dog at cat yoga

Cat yoga is a thing — and it’s happening in D.C.

Northern Virginia yoga instructor Beth Wolfe first heard of goat yoga about a year ago, when friends started alerting her to the trend on social media.

“It seems like out West this has become a thing, in the Pacific Northwest, where people go to goat farms or animal farms and practice yoga with the animals,” said Wolfe, who added that because goats are so friendly and want to be around people, they’re the perfect companions to practice alongside — assuming you’re an animal lover.

Some are even known to nuzzle up to yogis or climb on them, mid-pose.

Wolfe says while the concept sounds out there, it’s really right in line with the purpose of yoga and can be a welcome break from the monotony of studio classes.

“Everybody thinks of [yoga] just as the postures, stretching, exercising, but part of it is also social engagement, and community, and being present and breathing. So I think for this event, those elements will be more prominent than the postures, because there are going to be adorable little baby goats wandering around and people will want to interact with them, and we will encourage that, for sure,” she said.

Wolfe is holding her first goat yoga class on May 13 at The Little Goat Farm on the Lake in Nokesville, Virginia, which is about 40 miles outside of D.C. The class, which is $30 to attend, will last approximately 45 to 50 minutes. Afterward, participants are invited to pack a lunch and picnic by the lake or interact more with the animals. (There are also alpacas on the farm.)

And while the May 13 class is already sold out, Wolfe says she plans to hold more goat yoga sessions throughout the summer and into the fall, since clearly there is a demand. (She will post upcoming classes on her website.)