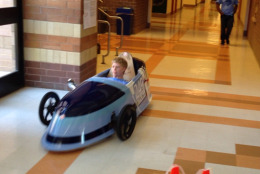 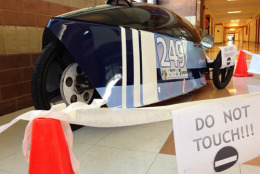 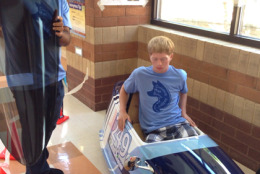 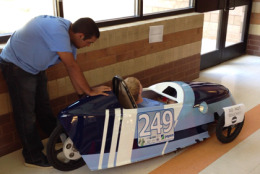 CLARKSBURG, Md. — Running in the hallways of Clarksburg High School isn’t allowed — driving an award-winning electric vehicle is OK, though.

The Montgomery County high school is reveling in its victory in the 2013 Washington D.C. Electric Vehicle Grand Prix and preparing for the national championships, held in California in October.

The rules of the race are simple: Drive as far as possible around a track on a single battery charge.

About the size of a go-cart, the light blue and navy three-wheeled vehicle is on display outside the main office, behind orange traffic cones and printed signs warning “Do Not Touch!!!”

Team members Carlos Diaz and Ryan Free explained their winning strategy and demonstrated the features of the car, which was designed and assembled by students.

“We went at a constant rate,” said Diaz, “so we don’t over-exceed the battery levels. We were smart about it, making sure we were always going about the same speed.

“The faster you go, the faster you’re going to drain the batteries,” added Free, who says the team took measurements during the race to determine whether they needed to speed up or slow down.

As Diaz removed the plastic shield covering the driver’s compartment, Free lowered himself into the seat, shimmying to scoot forward until only his head was visible over the top of the car.

With steering handles buried beneath the car’s body and a hand brake on each handle, the car is lined with wires leading to a primitive wood panel containing a pre-charge switch and an ‘on’ switch.

Free guided the car down the school hallway, driving past fellow students as one faculty member marveled, “Look at that.”

“We had to run off, before the competition that morning, and try to find a bicycle shop to take the chain guard off,” said Brooks.

Brooks is hoping local businesses will help sponsor the team’s quest of the national championship.