Solving murder mysteries in the National Gallery of Art

During Watson Adventure scavenger hunts, participants piece together a series of clues hidden in works of art throughout the museum and left behind by a \"murdered curator.\"
Listen now to WTOP News WTOP.com | Alexa | Google Home | WTOP App | 103.5 FM
(1/8) 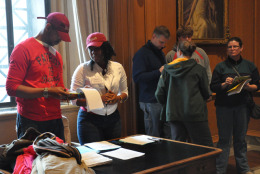 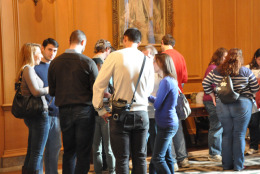 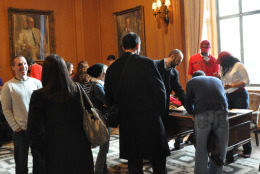 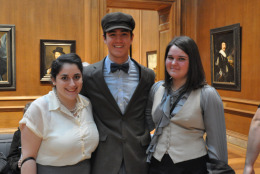 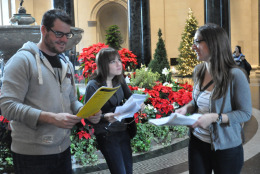 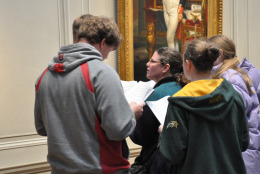 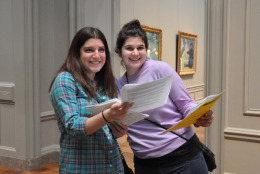 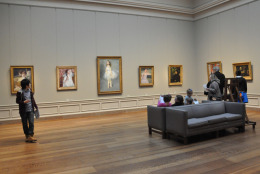 WASHINGTON – On a cold and rainy Saturday afternoon, about 40 adults gathered in a cozy, elegant room off the rotunda at the National Gallery of Art. As drizzles of rain hit a window pane, the room buzzed with talk of a murder.

Papers were distributed as the guests chatted quietly among themselves. Then, two people dressed in matching baseball caps bravely addressed the crowd.

“Are you ready to solve a murder?” one of them asked the group.

Everyone pushed in toward the speaker, eager to hear more.

No, this group was not meeting to crack an actual murder case at the art museum located on the National Mall. They were meeting to participate in a murder mystery scavenger hunt, organized by Watson Adventures.

The Murder at the National Gallery Scavenger Hunt is one of 11 public scavenger hunts that Watson Adventures organizes in the District.

During the National Gallery scavenger hunt, participants piece together a series of clues hidden in various works of art throughout the museum and left behind by a “murdered curator.”

Bret Watson, 52, founder and president of Watson Adventures, writes all the stories and questions for the company’s scavenger hunts, which occur in seven cities across the United States, including Philadelphia, New York and Boston.

To write the clues, he walks through each museum, taking note of closed wings, shifting exhibits and museum renovations.

“Writing a hunt forces me to go to a museum and look at literally everything, and I wind up discovering what I never knew was there,” Watson says.

Questions in Watson’s scavenger hunts prompt participants to solve clues in the story by finding “evidence” hidden in specific paintings or exhibit pieces.

Watson, a former editor at Entertainment Weekly who lives in New York, founded his company in 1999 after informally organizing scavenger hunts at museums for friends over the course of several years. One of his favorites is the Museum of American History in D.C.

“I love museums, and getting people to go to them and see things they haven’t seen before,” Watson says. “Being in a museum gives you a sense of time travel.”

After word got out about his small, private scavenger hunts, a New York-based financial firm hired Watson to orchestrate a scavenger hunt for an employee gathering. Now, a big part of Watson Adventures is conducting scavenger hunts for companies and private parties, in addition to public hunts.

“(The scavenger hunts) have employees interacting in a different way outside of the office,” Watson says. “It’s not a test of your history and art knowledge — it’s more a test of team work.”

D.C. resident Ashley Lusk attended a Watson Adventures scavenger hunt with her employer in 2010. The hunt, called The National Treasures Scavenger Hunt at the National Museum of American History, was organized as a team building retreat.

“(The scavenger hunt) allowed us each to use different skills to accomplish tasks,” Lusk wrote in an email. “For example, I’m a fast-reader, so I can scan ahead. Another co-worker was detail-oriented, so she would say,