Cornuskers-Sooners revival just another game to most players

LINCOLN, Neb. (AP) — The Nebraska-Oklahoma game Saturday is being celebrated by the older generations, the folks who long for the days when the battle of the Big Reds decided the Big Eight champion and often whose national title hopes survived and whose died.

It would be impossible for the players who will be on the field in Norman this weekend to fully appreciate the history because they weren’t alive when the rivalry was among the hottest in college football.

Tom Osborne, a central figure in the rivalry as an assistant and then head coach of the Cornhuskers, set up this year’s game back in 2012, when he was Nebraska’s athletic director. No one could have predicted where each team would stand today.

Oklahoma (2-0) is ranked No. 3 and again a contender for the College Football Playoff. Nebraska (2-1) has had four straight losing seasons and is in its worst stretch of football since the 1950s. Oklahoma is favored by 22.5 points, according to FanDuel Sportsbook.

It’s with that backdrop that the teams will meet for the first time in 11 years on the 50th anniversary of the “Game of the Century.” That clash of No. 1 Nebraska and No. 2 Oklahoma was the pinnacle of the rivalry, and the Cornhuskers’ 35-31 victory on Thanksgiving Day was the precursor to the second of Bob Devaney’s two straight national championships.

Huskers coach Scott Frost, who quarterbacked Nebraska in the waning days of the rivalry and owns two wins by a combined score of 142-28, said he probably would talk to his team about the tradition.

Some players know less than others.

The Nebraska-Oklahoma game decided the Big Eight title 31 times over 36 years. The Sooners lead the series 45-38-3.

The Big Eight merged with the Southwest Conference in 1996 to become the Big 12, and the Huskers and Sooners stopped playing their annual game after 1997. They met eight times from 2000-10, with Oklahoma winning two Big 12 championship games against the Huskers. Nebraska went to the Big Ten in 2011.

“I did hear when I was a kid that Nebraska was a big rivalry and stuff like that,” OU receiver Jadon Haselwood said.

Haselwood said Saturday’s game is important not because of the one-time rivalry but because it’s the next game on the schedule. He said the team would prepare for Nebraska same as it did for Western Carolina, which the Sooners beat 76-0.

Nebraska defensive lineman Ty Robinson said he’s watched highlights of Huskers-Sooners games on YouTube — “Those dudes were going after it,” he said — and he expects emotional talks this week from 1990s era players Jason Peter and Jay Foreman.

“They’ll tell us what they’re thinking and how it was when they were playing against them,” Robinson said.

Sooners quarterback Spencer Rattler gave a nod to what the series once was, but the game won’t have much impact nationally unless the Sooners stumble.

“Yeah, I know it’s a big rivalry — was back in the day,” Rattler said. “It’s going to be a big, fun atmosphere, especially being at home. It’s just another game, though. We’ve got to go in and prepare this week and see what they do on the defensive side and practice it to perfection and then come out Saturday and play our best for four quarters. It sounds boring and bland, but that’s how it is.”

Nebraska quarterback Adrian Martinez said he knew about the rivalry growing up in California.

“I’m really excited to finally be a part of it,” he said.

Why would Martinez, who was born in 2000, have such awareness of Nebraska-Oklahoma? 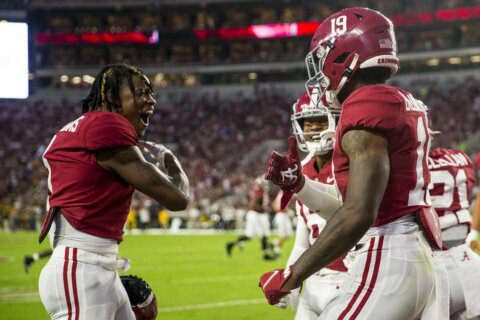 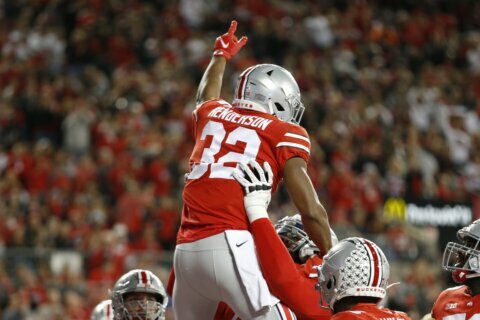