Aspirations are important, as well as remembering who you are and what you strive for.

For all of Maryland’s issues in March since joining the Big Ten (multiple flameouts in the Conference Tournament and just one trip to the Sweet Sixteen), they remain one of 12 schools that has won a National Championship since the turn of the century.

That’s why new head coach Kevin Willard doesn’t see a team that finished 15-17, but one that has the highest of ceilings. “It’s going to be the same every year. Big Ten championship, National Championship,” Willard said on the team’s Media Day last month.

“That’s the goal of this program. Is every year going to be possible? Some years probably more than not but that is our goal every year. Our goal will not be anything different besides win a Big Ten championship and hang another banner. No other expectation is allowed in this program.”

Willard comes to campus after building programs at Iona (21 wins his final season with the Gaels) and Seton Hall (a share of the 2020 Big East title and five trips to the NCAA Tournament). Unlike previous stops, he has the transfer portal at his disposal, but even though he could, the new coach didn’t want to flush the entire roster.

The guard who was brought in has plenty of familiarity with the Terps. Upper Marlboro, MD native Jahmir Young played locally at DeMatha Catholic before starting for three years with Charlotte. The All-Conference USA guard averaged 20 points, six rebounds and four assists for the 49ers last winter and hopes to translate those skills to this roster and rotation.

“Definitely leadership. A guy who’s played three years of college basketball, some experience,” Young said. “An aggressive player who likes to get downhill and get his teammates involved. An unselfish player who just really wants to win.”

Young is one of six transfers that includes former Georgetown guard Don Carey (14 points, four rebounds and three assists per game for the Hoyas in 2021-22 and a 45% three-point shooter the previous season). But the keystone to this work in progress is senior forward Donta Scott.

“Donta has been our best player — he’s lost thirty pounds. I knew Donta, I recruited Donta, obviously we (when he coached Seton Hall) played against him,” Willard said. “But I think just having him back was really huge because it kind of helped (show to) the people we were bringing in recruiting was guys that had stayed had bought in.”

For starters, Scott says the toughest thing to cut out of his diet was Wendy’s, and the Philadelphia native adds that being away from home helps him keep the cheesesteak consumption down. In a college basketball world where he wouldn’t have to sit out after transferring, why stay with a program in transition?

“Just because we got a new coach doesn’t mean we got new fans. The family base was still here,” Scott said. “That’s one of big the reasons why I came to Maryland because I thought it was a family-based atmosphere.”

The senior led the team in rebounding last winter and tied for the lead in blocked shots while ranking third in scoring and steals. And at 6 feet, 8 inches tall he’s the biggest regular on a small team.

“We’re really not that big. When you look at our roster we’re big on the wings … inside we’re just not big and dominant,” Willard said. “We’re not going to be able to slow down and just kind of grind it out. I like our guard-play. We shoot the basketball really well.”

Expect a lot of shooting the ball as the former Rick Pitino assistant will bring a different style to Xfinity Center.

“We’re gonna play probably way too fast, we’re gonna shoot a ton of threes,” Willard said. “We’re gonna press, we’re gonna get after it. Probably at times we won’t look good because I have thirteen guys who have played five different styles and now they’re trying to get my style but I think again we’re laying down the groundwork for the future.”

It’s going to be a work in progress. “Just being able to get used to that pace — sometimes he even gets mad at us for not shooting it, because we’re such an unselfish team,” Young said. “It takes some time getting used to it but I feel like we’re ready to play that way, ready to play that fast pace.”

The schedule begins Nov. 7 when Niagara comes to College Park and this team will play five games by Thanksgiving. Big Ten play begins against preseason No. 23 Illinois on Dec. 2. In addition to the Illini, two other conference teams are in the Top 25 with five others receiving votes. What will be the key to starting the new era strong?

“Just being in sync and locked in defensively. We got a lot of the guys who are offensive attackers and guys that can really open up the floor for other guys,” Scott said. “But just being in sync defensively as a team — I think that’s the biggest thing we want to focus on. Just making sure we can make top after stop because that’s what we kind of pride ourselves on especially being Maryland.”

No. 6 Tennessee aims for 20th victory of season in matchup with Vanderbilt 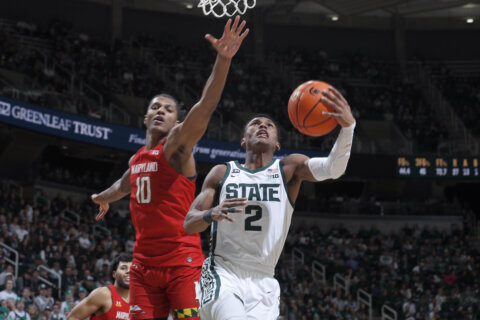