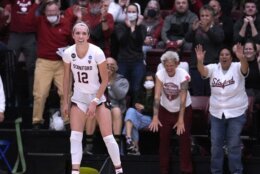 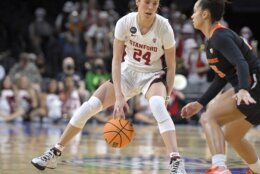 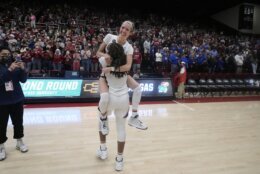 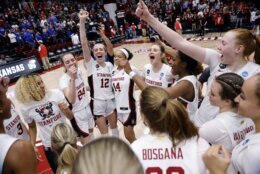 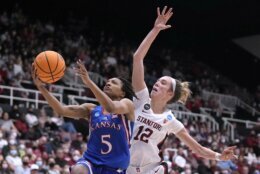 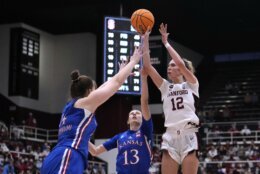 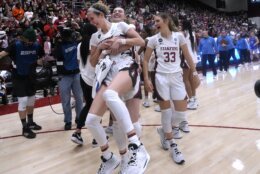 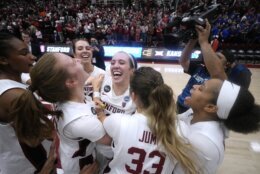 STANFORD, Calif. (AP) — When 2-month-old twins Lacie and Lexie Hull cried for six hours straight during a long car ride across Washington state then all the way through Thanksgiving dinner in 1999, perplexed new mom Jaime Hull had no idea what to do next.

They were fed. Diapers fresh. The babies had been bounced, rocked and held.

“That one, I’ll never forget … they were having none of it,” recalled Jaime, a new nurse at the time and the first of her close friends to have kids at age 25. The doctor assured her shortly thereafter she just had two Type-A, competitive babies.

More than two decades later and now young women, the twins are still going at it, providing far more lasting memories for the family as star senior guards for reigning national champion Stanford.

Just as the family hoped, the sisters will play back home in Spokane, Washington, when they lead the top-seeded Cardinal in the Sweet 16 against No. 4 seed Maryland on Friday.

Jaime can’t wait to cheer on her only children when Stanford brings a 22-game winning streak to the Pacific Northwest.

“Having them get to come home to Spokane is just amazing,” Jaime said. “You don’t realize it, and I think it’s going to be years to come that we kind of look back on everything that they’ve accomplished in their college career and really appreciate it, because when you’re in the middle of it, it’s like every game, even for me, I feel like I played in the game, I’m exhausted.”

Lacie and Lexie have come so far to shine on the March Madness stage.

They were born six weeks early and immediately placed on ventilators — the preemies long and lean at 4 1/2 pounds and each stretching 18 1/2 inches.

“I didn’t get to hold them,” their mom said. “These girls had to fight from the day they took their first breath. … It was scary. It’s just amazing where they are now.”

Jaime has long envisioned this latest homecoming all these years later for her twin daughters, now 6-foot-1 starters.

She and husband Jason — a twin himself — both send a separate “game-day text” to their girls. Mom’s message this past weekend: “Make it your best because this is the last chance you get.”

Lexie went out and delivered a career-high 36 points and six steals in Stanford’s second-round rout of Kansas on Sunday night. Lacie could be seen smiling as her sister knocked down shot after shot.

“Lacie and I looked at each other before we started running out, and we said to each other, this is our last one running out in Maples, so we wanted to give it everything we had,” Lexie said. “We knew it was over if we didn’t win, so we didn’t want it to be over, we wanted to make it to Spokane.”

This is hardly the first family connection on The Farm: Nneka and Chiney Ogwumike starred for the Cardinal and so did sisters Bonnie and Karlie Samuelson. Twins Jason and Jarron Collins and Brook and Robin Lopez played for the men’s basketball team.

The Hull twins wanted to play together in college, and Hall of Fame coach Tara VanDerveer offered that opportunity at Stanford.

“You don’t have a bad day with those twins. Every day they come to practice, they’re always the ones shooting afterward,” VanDerveer said. “They’re just competitive and their grades are like right at 3.99 or whatever, and they’re two of the nicest people. I am so spoiled as a coach to coach them, and I’ve said this before, but I get mad at their parents because they only had twins instead of triplets. They are so exceptional, students, student-athletes. I’m so lucky.”

Jaime and Jason, who will host a dinner for all the Stanford families on Saturday night, don’t remember many days their daughters didn’t push each other to be better.

“They’ve been competing since Day 1,” said Jaime, insisting their athletic and academic ability doesn’t come from her. “They’re way beyond me.”

When they turned 22 last fall, their mother posted on Twitter: “Both of you are my heart and soul. Couldn’t be more proud of the people you have become. Love you more.”

The Hull family hardly considers Spokane the last stop, either.