George Mason shocks No. 20 Maryland with 71-66 upset on road 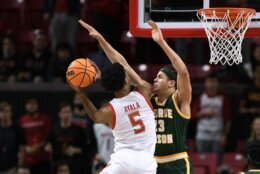 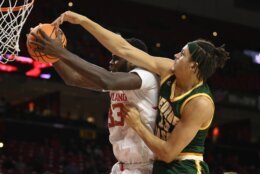 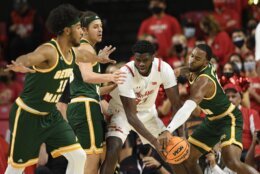 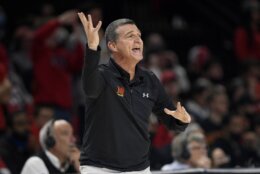 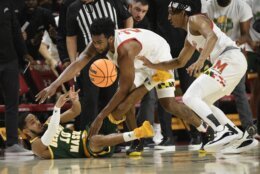 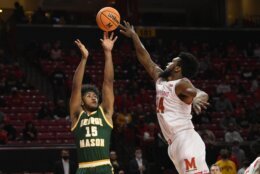 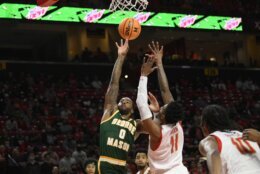 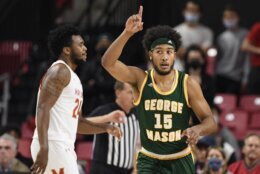 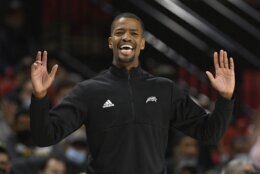 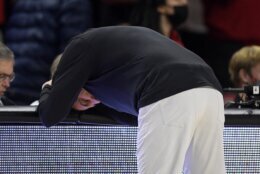 COLLEGE PARK, Md. (AP) — There might come a time this season when Maryland learns how to embrace its stature as a Top 25 team.

At this point, being ranked is more of a curse than a blessing to the frazzled Terrapins.

The Patriots (4-0) let a 10-point lead dwindle to 59-56 before Cooper made a layup and Schwartz made a 3-pointer for an eight-point cushion with 3:06 to go. That was just enough to provide George Mason with its first win over a ranked foe since 2007 and its first-ever victory against Maryland (3-1), which won the previous nine games against its Virginia-based opponent.

“They’re playing with incredible confidence right now and we’re not,” Terps coach Mark Turgeon said. “We think we’re supposed to beat everybody. It’s not that way. It’s too hard. We didn’t vote ourselves 20th. And so you take everybody’s best shot. We don’t know how to handle it yet. As soon as we figure out how to handle it, we’re going to be a better team.”

Playing its first season under rookie coach Kim English, George Mason opened with three straight wins of at least 20 points for the first time in school history. That included a 37-point rout of Morgan State on Sunday, the Patriots’ most lopsided victory since December 2016.

Their run of success went up a notch against the talent-laden Terrapins.

“I know it’s the first time George Mason ever beat Maryland and all that stuff, but it’s a quality road win for us,” English said. “We didn’t prepare for Maryland any differently than we did Stony Brook, Penn, Morgan State. Our standard is our standard. I’m really proud of our guys. It keeps us on track with our goals.”

The Terrapins used a pair of 3-pointers by Eric Ayala to get to 67-66 in the final minute before Josh Oduro scored inside for the Patriots. Ayala then missed a potential game-tying 3, dooming Maryland to a humbling defeat.

“We could never get over the hump,” Turgeon said.

Donta Scott had 18 points and 10 rebounds, and Ayala tallied 17 points for the Terrapins, who were seeking to start 4-0 for the eighth consecutive year.

“We’ll keep grinding, keep getting better,” Turgeon said. “We’re nowhere near figuring this thing out yet.”

Maryland trailed 32-31 at the break despite getting 13 points from Scott on 5-for-5 shooting. The deficit reached 10 points with 13 minutes left, and the Terrapins never could pull even.

George Mason led 59-50 with before a three-point play by Scott and three free throws from Julian Reese got the Terrapins within three points with 4:34 remaining.

But the Patriots would not relent.

The Terps came in unbeaten, but they struggled at times during each of those victories. Last week Maryland overcame a second-half deficit in a 67-56 victory over Vermont after squeezing past George Washington 71-64.

In this one, the Terps’ dismal 9-for-28 performance from beyond the arc and a failure to stop George Mason on the other end proved too much to overcome.

Schwartz, a graduate transfer from Colorado, went 6 for 10 from 3-point range. Afterward, he spoke about the upset as if it was just another win for English and the up-and-coming Patriots.

“That’s what he came here to do, to build this program up and win games like this,” Schwartz said. “In the locker room, we talked about doing nothing different from our first three games. Our standard is our standard, and that’s what we play to.”

Maryland bolted to a 15-4 lead before the Patriots rattled off 10 straight points during an 18-3 run that dispelled any notion that this might be a wire-to-wire blowout.

If Turgeon was concerned about how his team plays when ranked, that might not be an issue next week as there’s a good chance Maryland will drop out of the Top 25.

George Mason: The Patriots are playing with confidence and poise under English, who starred at Missouri and played in the NBA before getting into coaching at the college level. Mason has a balanced scoring attack but its calling card is a defense that relentlessly chased the Terrapins up and down the court and kept their taller foes out of the paint.

Maryland: The Terrapins have yet to play two solid halves in the same game, an annoying trait that must change once the competition stiffens. Turgeon insists it’s going to take some time for the transfers and freshmen to mesh with the returnees, and it appears as if he’s right.