Can Virginia’s defense win it a championship?

Tony Bennett's pack line defense has keyed his success at Virginia. But can this year's historic edition finally get the Cavaliers over the top?
Listen now to WTOP News WTOP.com | Alexa | Google Home | WTOP App | 103.5 FM

WASHINGTON — The idea that offense sells tickets, but defense wins championships, was born not in college basketball, but the NCAA’s other money sport. Legendary Alabama football coach Bear Bryant has seen the adage mete out for his own school on the gridiron. But can a defense carry a college basketball team to a title? What about the best defense of all time?

Tony Bennett’s Virginia Cavaliers may provide our best test study to date this year. Not only is the Hoos’ pack line defense posting the lowest scoring average in the country, it’s running laps around the competition. Only one other team is allowing fewer than 61 points per game: Cincinnati, at 56.1. Virginia is allowing just 52.8.

But as The Athletic broke down last week, U.Va.’s defensive effort isn’t simply great within the context of this season: It’s one of the best ever. And with a national TV game in Charlottesville on Saturday night following a loss by No. 1 Villanova earlier in the week, the Cavaliers were ready to ring in their shiny new top ranking in front of the whole nation.

Then, well, this happened.

Virginia Tech became just the second team to take Virginia down all season, and the first at John Paul Jones Arena (though the Cavaliers still ascended to the top spot in the country in Monday’s AP poll, albeit with a bit less gusto). In so doing, the Hokies vastly strengthened their own case for an at-large NCAA Tournament bid, but perhaps, more importantly, gave the rest of the country a road map of how to break down the pack line.

The pack line almost begs you to take threes, as the off-ball defenders sag slightly into the paint to shut down passing lanes and provide a half-step edge for help defense off the dribble. Both West Virginia — the other team to beat Virginia — and Virginia Tech have obliged, knocking down 40 percent and 38 percent from deep, respectively, with the Hokies scoring 33 of their 61 points from behind the arc.

Both teams feature strong, ball-handling guards in Virginia Tech’s Justin Robinson and West Virginia’s Jevon Carter. Each was his team’s leading scorer against Virginia (20/23 points) and each pitched in seven assists, breaking down the defense off the dribble, drawing help and opening up the perimeter game.

Virginia is forcing all other opponents into better than 14 turnovers a game, but WVU and Va. Tech gave the ball away just 10 times each, limiting the damage. U.Va.’s turnover margin of +5 per game ranks fifth in the country … but behind the Mountaineers’ +6.3. When they matched up, Bob Huggins’ crew won the rebounding and turnover battle by four each.

While the pack line adds extra bodies around the defensive glass, only Jack Salt and Isaiah Wilkins attack the offensive boards, while the guards quickly retreat to defend. That means the opportunity to get out and run in transition is hardly ever available, but also that missed Virginia shots often lead to one-and-done possessions.

Virginia has several good outside shooters, but the Hoos lack the creator they’ve had in Justin Anderson or London Perrantes in years past. As a result, they can end up settling for outside shots, as they did Saturday night when they took better than 62 percent (38 of 61) of their shots from behind the arc. When they have an off shooting night as they did Saturday — hitting one fewer field goal than the Hokies, despite 10 more shots — that can compound into long-scoring droughts, of which the Cavaliers had a couple, including a 7:40 scoreless stretch in the first half.

It all begs the question of whether Virginia’s defense can be good enough to overcome those offensive droughts. Last year’s top defense belonged to Gonzaga, which rode that all the way to the national final, but came up short. The last top defense to win the title was Louisville in 2013, but the Cardinals also had an elite offense, ranking 17th in the nation in efficiency entering the tournament (Gonzaga’s offense ranked 10th). U.Va.’s offense currently ranks 45th.

Both of Virginia’s losses have come to teams with Top 20 offensive efficiencies. They’ll face no team rated higher than 33rd (Notre Dame) the rest of the regular season, so there’s good reason to believe they’ll run the table their final five games. But they’ll certainly see top tier offensive teams again in the ACC Tournament and beyond.

Virginia’s headed for its fifth straight NCAA Tournament. Will a historic defense finally be enough to get them to the Final Four? 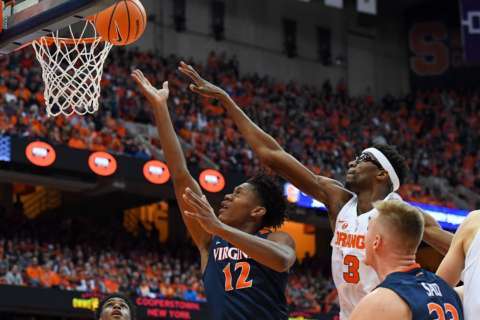 Is this finally the year UVa makes the Final Four?