GLIMPSES: If you give a crown prince a cricket cookie …

UNITED NATIONS (AP) — If you give a crown prince a cookie made with crickets, he’s going to take a…
Listen now to WTOP News WTOP.com | Alexa | Google Home | WTOP App | 103.5 FM

UNITED NATIONS (AP) — If you give a crown prince a cookie made with crickets, he’s going to take a bite in the name of combatting climate change.

Crown Prince Frederik of Denmark sampled the confection topped with dried crickets while participating in Tuesday’s session on sustainable food at the Citizen Sustainability Summit. The summit, put on by the Danish consulate in New York, aligns with this year’s high-level meeting of the U.N. General Assembly.

The crown prince and his wife, Mary, are attending the General Assembly to help launch Denmark’s candidacy for a seat on the U.N. Security Council in 2025, according to a press release from the palace.

The cookie was made by BugBox, an Estonian company that develops technology to sustainably rear insects for alternative proteins.

“The Crown Prince liked the cookie,” the summit’s spokesperson said.

For more on the U.N. General Assembly, visit https://apnews.com/hub/united-nations-general-assembly 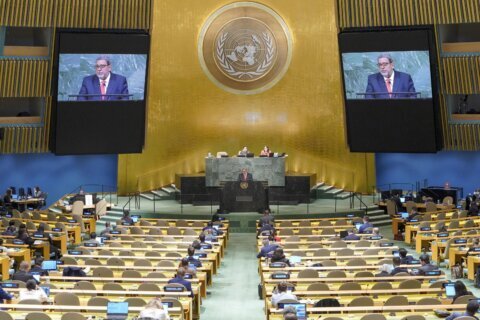