EAGLE PASS, Texas (AP) — A Texas National Guard member was missing Friday after going into the river along the U.S.-Mexico border to help a migrant who was struggling to swim across, according to a local sheriff.

A woman trying to cross the Rio Grande from Mexico made it about halfway to the other side when she appeared to begin going under the water, Maverick County Sheriff Tom Schmerber said. The rescue attempt happened near Eagle Pass at a section of the river known for strong currents.

“He jumped in the river,” Schmerber said. “They never saw him come out.”

He said the Guard member, who has not been identified, took off his jacket and left his radio before going into the water. The woman made it across and was placed in the custody of Border Patrol, said Schmerber, whose department was involved early in the search.

The Texas National Guard said in a statement that state troopers and Border Patrol agents were also helping. The attempted water rescue happened around 8:30 a.m., according to Schmerber.

The mission has come under scrutiny over migrants sitting in border jails for months on trespassing charges and low morale among Guard members over living conditions, long deployments and little to do.

Migrant rescues are common in the river along the Texas border, and the attempted crossings are also sometimes deadly. Schmerber said the bodies of as many as two migrants a week are sometimes found along his county’s section of the river.

Schmerber, a former Border Patrol officer, said Guard members do not usually enter the water to attempt rescues and this was the first incident he could recall. He estimated the portion of the river where the attempted rescue occurred was roughly 70 to 80 yards (64 to 73 meters) wide.

“That river is very dangerous. It’s strong currents,” Schmerber said. “It’s risky to cross the river like that.” 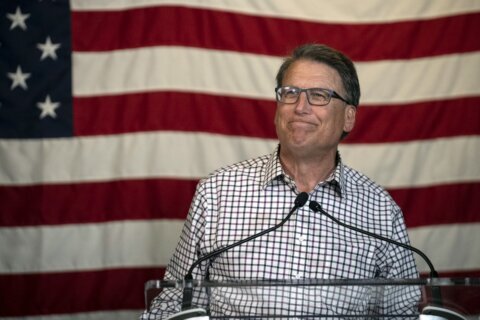