Public testimony went into its second week, and Wednesday proved to be revelatory. Here's what you need to know.

Public testimony went into its second week, and Wednesday proved to be revelatory.

“Everybody was in the loop,” said Gordon Sondland, U.S. ambassador to the European Union, in referring to the quid pro quo tying a White House visit by Ukrainian President Volodymyr Zelenskiy to that nation announcing a corruption investigation.

And, to be more specific, “everybody” included Secretary of State Mike Pompeo, acting Chief of Staff Mick Mulvaney and Vice President Mike Pence, among others. It amounted to what House Intelligence Committee Chairman Adam Schiff called “a seminal moment.”

Other testimony put the investigation into the deeper context of Russia’s relationship with not only Ukraine but the U.S.

Q: OK, so what do I need to know about Sondland’s public testimony?

Wednesday’s session marked the second time that Sondland amended his testimony since a closed session in October, during which he denied knowing about preconditions for U.S. security aid.

Then, earlier this month, he sent House investigators an addendum after other witnesses “refreshed” his memory.

Following public testimony that has put him under mounting scrutiny, he offered more changes on Wednesday. He blamed these changes on not having access to key documents and records.

“My lawyers and I have made multiple requests to the State Department and the White House for these materials. Yet, these materials were not provided to me,” he said in his opening remarks.

Highlights — and there are a lot of them — include the following:

“Burisma,” you’ll recall, is in reference to the Ukrainian energy company on whose board Joe Biden’s son served; “2016” refers to a debunked conspiracy theory that absolves Russia’s meddling in the U.S. presidential election.

(Also, this is your weekly reminder that the U.S. intelligence community concluded years ago that Russia, and not Ukraine, interfered in the 2016 election.)

Q: What’s the big deal about this phone call Sondland was talking about?

The July 26 conversation Sondland had with the president was overheard by David Holmes, a U.S. Embassy staffer working with top diplomat Bill Taylor. You’ll recall that on Nov. 13, Taylor told investigators that an aide said that he heard the president ask Sondland about an investigation.

That was Holmes, who last week detailed what he heard on July 26, when he was eating lunch with Sondland at a Kyiv restaurant.

From here, it’s probably best to let Holmes recount it in his own words and draw your own conclusions.

I heard Ambassador Sondland greet the president and … went on to state that President [Zelenskiy] “loves your ass.” I then heard President Trump ask, “So, he’s gonna do the investigation?” Ambassador Sondland replied that “he’s gonna do it,” adding that President [Zelenskiy] will do “anything you ask him to.” Even though I did not take notes of these statements, I have a clear recollection that these statements were made.

Holmes also illustrated an apparent contrast between what benefits U.S. foreign policy and what benefits Trump. He recalled his reaction upon reading the White House account of that July 25 “do us a favor, though” call between Trump and Ukrainian President Zelenskiy.

“… I was deeply disappointed to see that the president raised none of what I understood to be our inter-agency agreed upon foreign policy priorities in Ukraine and, instead, raised the Biden/Burisma investigation and referred to the theory of Crowdstrike,” he said.

Q: What did we learn from two witnesses who were called by Republicans?

Former special envoy to Ukraine Kurt Volker claimed on Tuesday that he was slow to make the connection between the Bidens and Trump’s desire for an investigation into Burisma: “In retrospect, I should have seen that connection differently, and had I done so, I would have raised my own objections.”

Contrast this to text messages that Volker shared with investigators, in which that connection was apparent to acting Ukrainian ambassador Bill Taylor.

Volker also defended the former vice president: “On July 19, Mayor Giuliani raised, and I rejected, the conspiracy theory that VP Biden would have been influenced in his duties as VP by money paid to his son. … I have known Biden for 24 years. He is an honorable man and I hold him in the highest regard.”

Timothy Morrison, the former deputy assistant to the president, told investigators Tuesday that the decision to put the account of the July 25 call on an ultra-secure server was merely “an administrative error.”

Q: Wasn’t an aide to Pence supposed to testify this week, too?

Yes. Jennifer Williams, special adviser to Pence, further tied the vice president to the scandal with her Nov. 7 testimony, which was also released to the public on Saturday.

Not only was she listening in on that July 25 call and felt it was “unusual and inappropriate,” but she also included a transcript of the call in Pence’s briefing book that day.

In addition, she said that she had flagged for Pence spring 2019 news reports that Giuliani was pushing for investigations of both Burisma and the supposed 2016 election interference by Ukraine (per that debunked conspiracy theory).

And, according to Williams, it was Trump who asked Pence not to attend Zelenskiy’s May 20 inauguration, amid the pressure campaign.

In her public testimony Tuesday, she also told the panel that the July 25 call was different from others she had heard during her career, and that her own notes of the call mentioned Burisma, contradicting the White House’s summary.

Q: Fiona Hill testified earlier behind closed doors. Was there anything noteworthy in her public testimony Thursday?

The former White House adviser on Russia countered Republicans, who are doubling down on the conspiracy theory that Ukraine, not Russia, interfered in the 2016 presidential election. In her opening remarks Thursday, she characterized it as fiction pushed by Russian security services.

The impact of the successful 2016 Russian campaign remains evident today. Our nation is being torn apart. Truth is questioned. Our highly professional and expert career foreign service is being undermined. U.S. support for Ukraine — which continues to face armed Russian aggression — has been politicized.

The Russian government’s goal is to weaken our country — to diminish America’s global role and to neutralize a perceived U.S. threat to Russian interests. …

President Putin and the Russian security services operate like a Super PAC. They deploy millions of dollars to weaponize our own political opposition research and false narratives. When we are consumed by partisan rancor, we cannot combat these external forces as they seek to divide us against each another, degrade our institutions and destroy the faith of the American people in our democracy.

Hill also warned the panel that more interference from Russia is on the way in 2020.

“We are running out of time to stop them,” Hill said.

On Tuesday, the National Security Council official revealed that he provided an account of the July 25 phone call to someone in the intelligence community. Given the GOP’s interest in outing the whistleblower, they asked for names.

Vindman declined, and Rep. Adam Schiff, the House Intelligence Committee’s chair, stepped in to stop the line of questioning, in keeping with federal whistleblower protections.

The whistleblower has been said to be in the CIA.

As of Thursday afternoon, nothing is on the Intelligence Committee’s schedule for next week.

Testimony junkies, one assumes, will have to binge on turkey and pie instead. 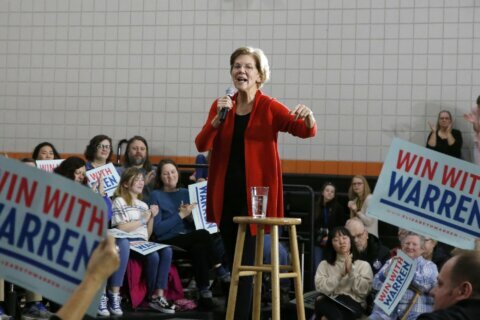