"It is a dangerous storm because of high winds, low visibility and heavy snow," said Lenore Correia, a weather service meteorologist in Taunton, Massachusetts.

PORTLAND, Maine (AP) — Plow trucks and shovelers in the Northeast attacked the region’s latest winter storm, which dumped 30 inches of snow on a Maine town, made roads unsafe and immobilized millions of residents Monday.

The storm was most active from New York to Maine, where blizzards shut down towns and left more than 2 feet of snow in many areas. Strong winds created problems in New York, New Jersey and Pennsylvania, where a tree branch crashed through car windshield in Mechanicsburg, killing the driver.

Many Maine residents will be unable to dig out until Tuesday morning, as the daylong snowfall only began to let up Monday evening.

Some schools already had canceled school for Tuesday, and more snow was forecast for Maine, New Hampshire, Vermont and Massachusetts on Wednesday.

In Hopkinton, New Hampshire, attorney Matt Lane said he was a bit surprised by how much snow had fallen.

“Up until last week we didn’t have very much; we had a little but not like this. And now suddenly, you can’t see over the snowbanks when you’re backing out of the driveway, and we’ve been running the snow blower 24-7,” he said.

Snow totals in Maine included 30 inches in Cary, near the Canadian border; 27 inches in Nobleboro; 25 inches in Starks; and 20 inches in Harpswell.

In New Hampshire, up to 14 inches fell in Ossipee, and a foot covered Berlin. Scattered power outages were reported, and the forecast of strong winds and coastal flooding remained a concern.

Several crashes were reported between Sunday and Monday. Schools around the region delayed or canceled classes, including in Boston and some areas of New York state.

Just north of New York City, a Metro-North train struck a fallen tree, damaging the train and hampering service for hours, but causing no injuries. About 100 passengers were onboard. And in Queens, the canopy of a gas station was ripped down as winds gusted up to 60 mph in some areas.

There were reports of thunder and lightning accompanying snow in Nobleboro. The Mountain Washington Avalanche Center issued an extreme avalanche danger warning on two trails.

Nearly all flights in and out of the airport in Manchester, New Hampshire, were canceled. The airport in Portland, Maine, also was closed.

The new snow came on the heels of a series of other storms, including one last week that dumped 19 inches on parts of Maine.

Raychell Libby, from Portland, walked through a path that had been cut through the snow, piled hip-high.

“I really love the paths that are made afterward,” she said as she chugged along and walked Logan, her 7-year-old Catahoula mix. “It’s kind of like a winter wonderland.”

“And while I can’t grant official pardons out-of-state, I certainly hope all will be granted a ‘snow day’ pardon. Visitors can feel free to tell their boss Vermont’s governor asked them to stay,” Scott said.

Fluffy snow blanketed parts of the Northeast on Monday, days after a winter storm dumped more than a foot of a snow on the region. These photos capture the snowy scene. 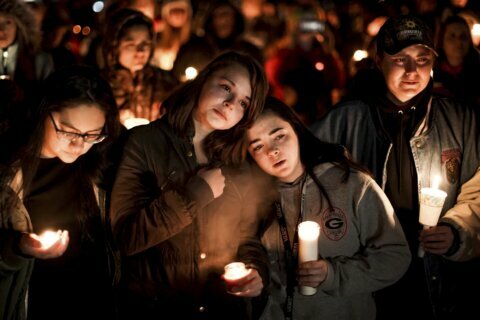 Teen charged as adult in fatal family shooting in Utah