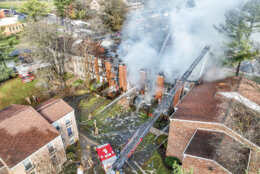 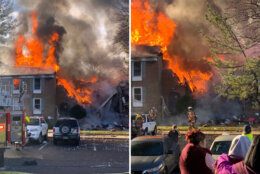 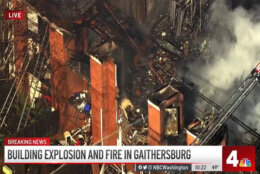 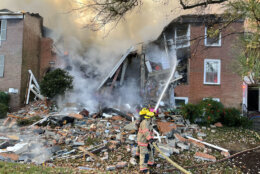 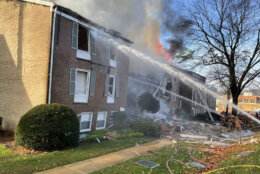 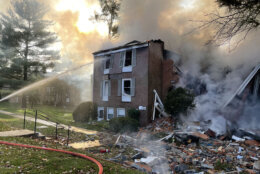 Twelve people were injured, including two critically, in an explosion and fire that ripped through a condo building in Gaithersburg, Maryland, Wednesday morning.

The blast was reported at the Potomac Oaks Condominium, a row of garden-style condos in the 800 block of Quince Orchard Boulevard, near Rabbitt Road, at about 8:40 a.m.

It appears most residents have been accounted for after the blast, Montgomery County Fire Chief Scott Goldstein told reporters.

Goldstein later said emergency crews have accounted for all residents of the four buildings impacted by the blast, except for the residents of one unit at 826 Quince Orchard Blvd., one of the buildings that partially collapsed.

Crews have been unable to search a total of nine units because conditions were too dangerous. And Wednesday evening, the chief said it will take days to get the building stabilized so it can be searched. Crews will be bringing in a crane, lights and fencing Wednesday night to the site.

Overall, two buildings sustained significant damage and partially collapsed in the blast. Two other buildings, connected to those two, were also evacuated because they may have structural damage.

It’s still not known how many residents will be displaced by the blast, but Goldstein said it could be 50 to 75 people. There are 24 total units in the four buildings that are uninhabitable.

A reception center and shelter for residents opened at 3 p.m. at the Activity Center at Bohrer Park, which is located at 506 S. Frederick St. in Gaithersburg, near Gaithersburg High School. The center will provide help with housing, food, crisis services and medication, said Patrick Campbell, an official with the county’s Department of Health and Human Services.

A donation website has also been set up by Montgomery Housing Partners to raise funds for affected families.

Campbell said 100% of the funds will go to residents.

Of the injured, 10 people were taken to hospitals, including two with critical injuries, the fire chief said. They are both adults.

After battling heavy flames and smoke, firefighters had knocked the bulk of the fire down by about 9:30 a.m. but the rubble pile is expected to continue smoldering several hours if not days, Goldstein said Wednesday afternoon.

After firefighters arrived, they discovered what Goldstein described as a “gas-fed fire” in one of the building’s basements that required Washington Gas to shut off the gas before firefighters could work on putting out the flames.

However, it’s still too soon to know the cause of the blast, Goldstein added.

“Natural gas is not a suspicion” in the blast, Goldstein said in response to multiple questions from reporters, before adding it will be investigated as a potential factor.

“Please understand this is practically only six hours to seven hours into this event,” Goldstein said later Wednesday evening. “It is too early to make conclusions.”

Goldstein said some residents told fire investigators at the scene they smelled gas before the explosion, but a review of 911 call logs indicated no calls Wednesday morning, he said.

The Fire Department did respond to a 911 call on Sept. 22 about a potential gas leak at 826 Quince Orchard Blvd., Goldstein said. Hours later, he said the call involved an appliance, so Washington Gas was not contacted. The resident was told to address it with an appliance vendor or contractor.

As a precaution, Goldstein said crews were in the process of checking all the units in buildings in  the entire 700 and 800 blocks of Quince Orchard Boulevard for gas leaks.

“The residents, when they come back to this complex tonight … should feel safe that fire rescue personnel have gone through those units and have checked those units and all common areas,” Goldstein said.

If you ever smell gas, you should immediately leave whatever building you’re in and call 911, Goldstein added.

Wednesday evening, Goldstein said that in the four buildings involved, there has been no reported work or issues addressed by property management in the last two weeks.

At the time of the explosion, he said, excavation work was underway in a parking lot roughly 40 to 50 feet away from the back of the building involved. Contractors were working on steam and water pipes, Goldstein said, but so far there is no indication that it was related.

It was around 8:40 a.m. that the fire department began receiving a “deluge” of 911 calls about the explosion, Goldstein said.

The fire chief credited a quick-thinking maintenance crew using a painter’s ladder with rescuing two people from the flames before firefighters arrived on the scene, including a resident from a rear balcony.

Another man, Linson Antonio Matute, told WTOP he lives nearby and ran to the building after hearing the explosion and seeing flames coming from the building.

As he approached the front door, he said he saw four people, including a woman with a baby, who were trying to escape.

“We were shouting, telling them to come out but they couldn’t because there was a lot of smoke and all we could see was their phone flashlights,” Matute told WTOP in Spanish.

Eventually, Matute and another went into the building to help get the people out, including the baby who appeared to be OK.

Tyrell Singleton, who lives near the building, heard the explosion.

When he and others went to the scene, he said, the front of the building had collapsed and there was a hole in the ground at the smoke-filled site.

Brandon Savage, who owns a small business across the street from the building that went up in flames, also heard the explosion.

“The entire building shook,” he told WTOP. “I’ve never experienced anything like this. It was a very terrifying experience.”

Adrianna Hernandez, who was staying with cousins near the explosion site, said they heard a “super loud noise.” Then her cousin began getting phone calls.

“We grabbed our pets, we got bundled up and we were like, ‘Let’s try to go somewhere else,’” she said. “We didn’t know if our buildings were safe because then we were hearing on the phone that it was an explosion in the apartment buildings and we live in this complex right here.”

When she looked outside, she said, she saw “probably the biggest cloud of smoke” she had ever seen in person.

“The smoke initially right after I guess the explosion was so dark and so heavy,” Hernandez said, “and it just like took over the neighborhood.”

Well over 100 firefighters and rescue crews responded to the scene.

This is the third explosion in a residential building in Montgomery County since 2016.

Earlier this year, 14 people were hospitalized after an explosion and fire at the Friendly Garden Apartments on Lyttsonville Road in Silver Spring.

In 2016, seven people were killed in a massive early-morning explosion at the Flower Branch apartments, also in Silver Spring. A faulty piece of equipment, known as a mercury service regulator, was cited as a cause of that blast.

Goldstein said it’s too early to draw any comparisons between the last explosion and the earlier blasts.

“That information will come, but it is way too early to have speculations or information on that,” he told reporters.

What concerns Montgomery Co. Council ahead of Md. General Assembly session in January? 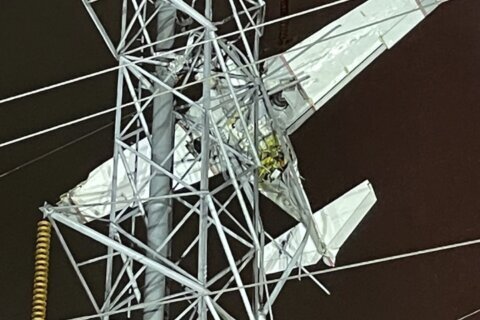