Holidays: 'Enchant' shines with millions of lights in Nats Park | Where to see holiday lights | Send in photos of decorations | How to give greener this season
Home » Montgomery County, MD News » Disconnected gas regulator, unknown…

The National Transportation Safety Board has determined a "communication gap might have resulted in missed opportunities to detect and repair the failure" in the basement natural gas system that caused the explosion at the Flower Branch Apartments in August 2016, killing seven people in Silver Spring, Maryland.
Listen now to WTOP News WTOP.com | Alexa | Google Home | WTOP App | 103.5 FM

The National Transportation Safety Board has been unable to determine the ignition source that sparked the explosion in a Silver Spring apartment complex meter room, where natural gas had been building up for at least three hours.

Seven people were killed and 65 were sent to the hospital after the explosion and fire at the Flower Branch Apartments on Aug. 10, 2016.

In announcing its findings during an NTSB board meeting, the agency announced its probable cause: “the failure of an indoor mercury service regulator, with an unconnected vent line, that allowed natural gas into the meter room, where it accumulated, and ignited from an unknown ignition source.”

“Contributing to the accident was the location of the mercury service regulators, where leak detection by odor was not readily available,” according to the report approved Tuesday by the agency. 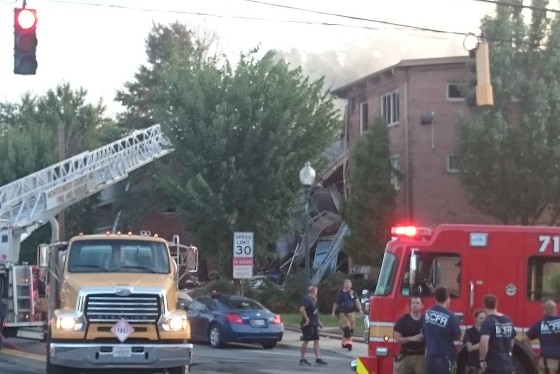 In presenting its findings, the board also outlined 13 recommendations to various entities and Washington Gas. These include “the installation of fixed methane detectors that go beyond relying on smell.”

“The odorant in natural gas provides some warning but methane detector alarms can provide a reliable additional safeguard,” the board said, in a statement.

In opening remarks of a Tuesday NTSB board meeting in D.C., Chairman Robert Sumwalt said: “Six times in the weeks and months preceding the accident, residents reported that a natural gas smell [was] reported to Kay Management. In each case, maintenance staff reported that they did not detect gas, or attributed the smell to the painting of apartments.”

Two weeks before the blast, a resident had called 911 to report the smell of gas, Sumwalt said, but the Montgomery County Fire and Rescue Department was unable to access the building’s meter room and did not detect the gas.

Bruce Landsberg, vice chairman for the NTSB, said “we missed a good opportunity” when the fire department didn’t break down the door, after finding the meter room lock had recently been replaced.

Landsberg said he detected “a lack of urgency” in determining the source of the reported odor.

Robert Hall, director of railroad, pipeline, and hazardous material investigations, said that the fire department did not detect gas odors, and that breaking down a door could have provided an ignition source.

Sumwalt said despite the reports of residents smelling gas, nobody told Washington Gas — the entity most qualified to deal with the situation.

“For five years prior, there was no evidence that residents, Kay Management, or any emergency personnel notified Washington Gas of a gas odor,” Sumwalt said.

According to the report findings: “Had Washington Gas been notified of the gas odor call on July 25, a service technician may have had the opportunity to enter the meter room of building 8701, identify the unconnected vent line, and remedy the situation, potentially preventing the gas release and explosion that occurred on August 10.”

In its recommendations, the board recommended revising emergency dispatch protocols, “to direct dispatchers to notify the gas company when any odor call is received.”

On the night of the blast, the same resident smelled gas, intensifying as he walked downstairs toward the basement. Before he could call 911, the building exploded.

The Bureau of Alcohol, Tobacco, Firearms and Explosives wrote in a preliminary report in August 2017 that they’d found a disconnected vent pipe in the basement room where natural gas built up before the explosion and fire.

The ATF had not determined when the pipe was disconnected, or by whom, but it bypassed a safety feature intended to vent gas from the basement room to the exterior.

In the NTSB’s investigation, Frank Zakar, senior metallurgist of the Materials Laboratory Division, said a mercury service regulator not connected to its vent line “was the most likely source of the natural gas release in the meter room.”

In its report to the NTSB, Washington Gas suggested the disconnection may have happened during the explosion.

Sumwalt and NTSB investigators said evidence showed the pipe had likely been disconnected for a period of time — or perhaps never been connected — since there was no evidence it had uncoupled during the explosion.

Rachael Gunaratnam, an NTSB investigator, told Sumwalt that Washington Gas was responsible for maintenance of the vent line.

The 2016 explosion in the garden-style apartment left dozens hospitalized, including three firefighters.

In opening the meeting, Sumwalt said the agency was aware the almost-three-year investigation had been frustrating to survivors and families “during a time already marked by pain and loss.”

Sumwalt asked families to realize the NTSB agency has done a thorough, time-consuming examination, “so others will be spared a future pain and loss.”