Hundreds line up as Amazon Fresh opens in Chevy Chase

Amazon Fresh opened its third D.C.-area grocery store Thursday morning, welcoming around 200 people standing in a line that wrapped around the corner, waiting to get in as the Chevy Chase, Maryland, location opened its doors for the first time at 7 a.m.
Listen now to WTOP News WTOP.com | Alexa | Google Home | WTOP App | 103.5 FM
(1/7) 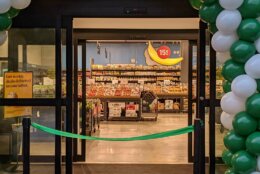 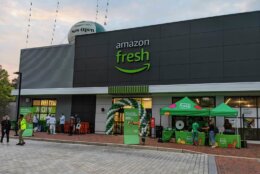 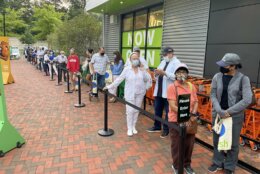 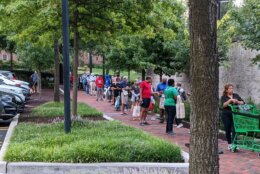 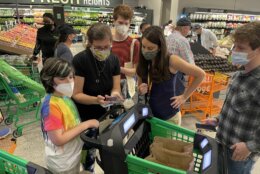 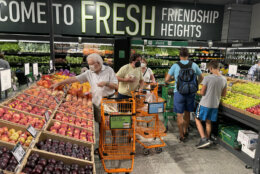 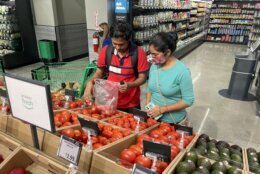 The parking lot was packed, a DJ was playing music and the staff was ready.

Amazon Fresh opened its third D.C.-area grocery store Thursday morning, welcoming around 200 people standing in a line that wrapped around the corner, waiting to get in as the Chevy Chase, Maryland, location unlocked its doors for the first time at 7 a.m.

At the front of the line were Mary and Penny Charles from Kensington.

“We are very excited and anxious to check it out. We’ve been here since 4:30 a.m.,” said Penny Charles, standing next to her mother. “We are Amazon Prime members!”

Michael Jackson’s “Pretty Young Thing” was playing in the background as store manager Amy Denner grabbed her microphone and announced the store was ready to open.

Hundreds of excited new customers made their way into the store as employees danced, clapped and waved their arms in excitement.

The Siegel family were some of the first to enter. Store clerk Lisa Goldman gave them instructions on how to operate the Dash Cart, an app-based shopping cart that allows customers to skip the checkout line.

“It’s easy, but you have to scan a code to connect to your Amazon account the first time. You walk in, scan the code, shop and you walk out,” said Candace Siegel of Rockville, alongside her kids Jesse and Jack. Jack, 10, was excited to get the $5 gift card and the free disposable bag at the opening.

“It automatically adds the items in your cart, and it charges your card,” she added.

Sunanda Chaterjee and her husband, Samar Kumar Mistry, raced to the produce aisle.

“We have been waiting for a long time for a grocery store nearby. There is Whole Foods, but we wanted to have more options,” Chaterjee said.

The full-service grocery store is located at 5463 Wisconsin Ave., next to the Friendship Heights Metro stop. It replaced a former Giant, one of the chain’s smaller stores, which closed in January 2020.

There are only a handful of Amazon Fresh stores currently open, mostly in California and the Chicago suburbs, with one location in Bellevue, Washington, outside of Amazon’s hometown of Seattle.

Other D.C. area locations are in the works, according to the Washington Business Journal.