Howard County prosecutors, who carried out the investigation into the shooting of 30-year-old Finan Berhe, concluded that the shooting was "reasonable given the circumstances."
Listen now to WTOP News WTOP.com | Alexa | Google Home | WTOP App | 103.5 FM

A Montgomery County police officer who shot and killed a man in Silver Spring, Maryland, in May will not face criminal charges.

Howard County prosecutors, who carried out the investigation into the shooting of 30-year-old Finan Berhe, concluded that the shooting was “reasonable given the circumstances.”

On May 7, Montgomery County Police Sgt. David Cohen responded to a call about a man with a knife in the White Oak section of Silver Spring. A neighbor had called police after hearing a loud crash, and found that Berhe had thrown a rock through his window.

According to the report released by prosecutors, the neighbor, who knew Berhe, asked Berhe why he threw the rock. Berhe reportedly responded “I’m just ready to go,” and urged the homeowner to call police.

According to police, Cohen saw Berhe with a large kitchen knife when he arrived on the scene and got out of his cruiser. Police, along with Montgomery County prosecutors, released body camera footage of the incident.

Cohen repeatedly ordered Berhe to drop the knife and get on the ground, and Berhe ignored the orders, at one point rushing toward Cohen, who then fired his weapon five times.

“The threat caused by Mr. Finan Berhe, running directly at the officer with a knife in his hand, disobeying all orders to drop the knife, justified the use of deadly force in this case,” Howard County Deputy State’s Attorney Chris Sandmann told reporters.

At a Friday news conference where the findings were released, Montgomery County Police Chief Marcus Jones called the findings “fair.”

Jones was asked about the police response, and whether Cohen took enough time to deal with someone who might have been suffering from a mental health crisis.

“Sgt. Cohen did not know Mr. Berhe. We knew nothing about any mental health issues” at the time, Jones said, and he referred to body camera footage of the shooting.

“I think if you look at the video — that Sgt. Cohen is approached aggressively by Mr. Berhe immediately after getting out of his police vehicle,” Jones added.

In response to the findings, Montgomery County Council Member Tom Hucker tweeted: “What a shame. #FinanBerhe and his family deserve justice. This underscores our need to expand our Mobile Crisis Team so we can send trained behavioral health officers to our residents in crisis, not just armed police officers.”

In response to the findings, Del. Jheanelle Wilkins tweeted, “When we rely on police investigating themselves and then a rubber stamp from Howard County, this comes as no surprise.”

The Fraternal Order of Police also tweeted in response to the findings that “Any loss of life is tragic and the death of Finan Berhe is no exception. As was the case in this incident, police officers strife (sic) every day to deescalate dangerous situations and avoid fatal outcomes.”

Howard and Montgomery County governments have an agreement that when an officer from one jurisdiction is involved in use of force or accused of wrongdoing, the state’s attorney’s office from the other county carries out an investigation and issues findings.

“The goal of our agreement is and was to increase public confidence in the fair and independent manner in which these very important matters are investigated,” Montgomery County State’s Attorney John McCarthy said Friday.

The Montgomery County Council has enacted legislation that limits police use of force and is currently considering a bill that would make changes to police disciplinary procedures.

The Maryland General Assembly is holding hearings on a number of proposed police reforms, with another hearing scheduled for next week. The measures have been before the Senate Judiciary Proceedings Committee, chaired by state Sen. Will Smith from Montgomery County.

Read a summary of the report from Howard County prosecutors here. 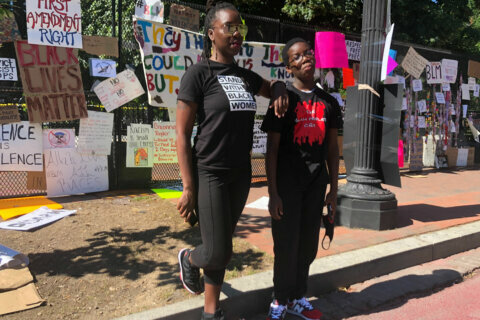 Protests in the DC area continue for an 11th day