How does a haunted attraction scare during a pandemic? Md.-based Markoff’s Haunted Forest brings socially-distanced frights

Haunted hay rides and houses are an October staple. But many of these scares put Halloween revelers and staff in close proximity to each other. Maryland-based Markoff's Haunted Forest had to find a way to retool its attractions so it could open for the 2020 season.
Listen now to WTOP News WTOP.com | Alexa | Google Home | WTOP App | 103.5 FM
(1/2) 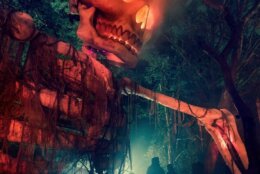 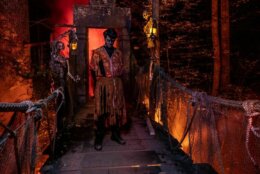 You find yourself in a dark and eerie wood, surrounded by close friends and family, and that is some comfort. You know you’re being watched, but don’t know where your tormentor is hiding.

Suddenly, in the tree-line, you get a glimpse of a grotesque, shambling thing. Its gray skin, blotched and ragged with cuts, spills blood that has long stopped flowing; its eyes are clouded and yet focused on you and your party; its mouth is — wait, is that zombie wearing a facemask?

That is just one part of the new reality of running a haunted attraction in a pandemic, and something that the operators of Markoff’s Haunted Forest in Dickerson, Maryland, have had to consider as they retool their popular attraction for Halloween 2020.

In a normal year, Markoff’s features two haunted trails, a town and plenty of horror-themed games. But this year, the coronavirus pandemic has forced the attraction to be streamlined into a single trail that combines some of the most popular elements of each forest trail.

Social distancing guidance also means changes will be made to keep employees who work on the trails (also referred to as actors) and visitors safe.

Yet it begs the question: How do you scare somebody from 6 feet away?

Dave Harding, the staffing manager and trainer with Markoff’s Haunted Forest, said it helps that the pandemic has moved the boundary of what people consider their personal space.

“That was a big thing for a lot of folks,” Harding said, talking about the feelings of disappointment in changing how some of the more popular scares would work. “What’s scary is when a person walks up on the trail, grabs your girlfriend’s hand and they think it’s their boyfriend — that freaks me out.”

Harding said those styles of scares won’t be happening this year.

“Due to COVID, people’s comfort bubbles … have actually gotten a lot bigger, and so it doesn’t take as much to make them feel uncomfortable now,” he said. “So anything — even if it’s a fake plastic zombie arm — reaching into that 6-foot zone for them is gonna be a little more terrifying.”

Julie Clendenin, a director at Calleva — a nonprofit, and the 160-acre farm where the haunted forest is held — said the location itself provides plenty in the way of scares.

“For me, when I’m walking in the dark woods and there’s mist and there’s lighting that creates an atmosphere that is creepy — that is a huge part of what we do at Markoff’s Haunted Forest,” Clendenin said. “Which is create an atmosphere that is just a little bit off or creepy for people, so they’re already on edge, which then enables the animatronics and sound and lighting and … smells that add to the scare element.”

Clendenin said Markoff’s has been working with local health officials throughout the entire process of setting up for the 2020 season to figure out the best practices for operating a haunted attraction during a pandemic.

Along with the changing of attractions themselves, the actors have had to be retrained on how to scare without relying on up-close-and-personal tactics.

“Instead of leading with your face — which is what’s gonna be causing, of course, contaminants, and we worry about the actor themselves — if we’re leading with an arm or something else, we can still keep your face 6 feet away from their face,” Harding said.

The use of animatronics in scares have also been scaled up this year.

“So those are mechanical pieces and scares that don’t have to have an actor working them,” Harding said. “That’s something that runs on its own, it’s all computerized and runs off air. And so those scares can still happen within 6 feet of somebody, because it’s not a physical person that’s putting off anything.”

Harding said not everyone in the haunted attraction business locally made the decision to retool sites to meet the demands of this season, but Markoff’s already had several advantages going for it that made the process a little easier.

“We’re an outdoor attraction, so that’s helpful for us to start with — fewer hoops that we have to jump through, but there’s still plenty of them,” Harding said. “So we’ve had to go scene by scene and decide: ‘Alright do we have to take this out or remove this because this is a touching hazard?'”

A few props, like anything that hangs down from a ceiling into guests faces, also had to be removed to comply with health safety standards.

“It does affect some of the feel of these scenes, but I can guarantee that they’ll still be plenty scary,” Harding said. 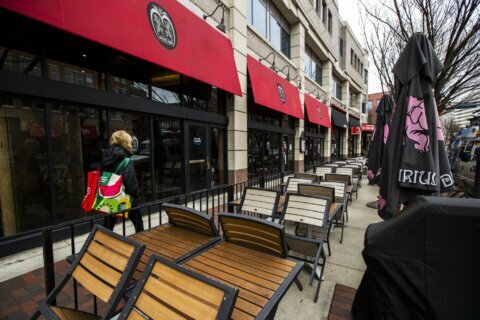