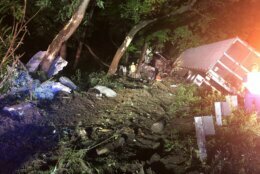 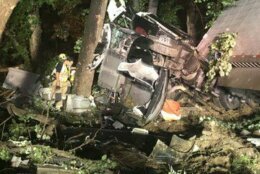 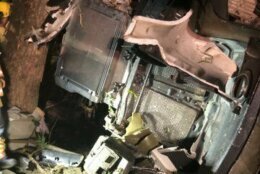 More than 20 hours after a tractor-trailer crashed on the Capital Beltway in Bethesda, Maryland, all lanes reopened on the Inner Loop after a time-consuming recovery operation Thursday.

The tractor-trailer barreled off the Inner Loop into the woods between Old Georgetown Road and Route 355 late Wednesday around 9:15 p.m., sending debris flying. The truck felled several trees and damaged more than 100 feet of guardrail.

According to Montgomery County Fire and Rescue spokesperson Pete Piringer, firefighters responded to a fuel spill and large debris field.

The truck remained in the woods and on the left shoulder overnight.

The driver of the truck was taken to an area hospital with injuries not considered to be life-threatening.

The recovery of the truck resumed later Thursday morning as crews used multiple heavy duty wreckers to winch the truck and trailer from the median.

Several dumpsters were used to carry debris from the scene.

For comparison, the infamous tanker truck crash on the American Legion Bridge last March took about 12 hours to clear. The impacts from Wednesday’s truck crash were far less severe.