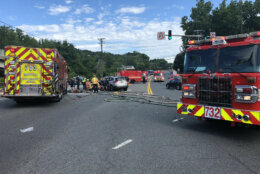 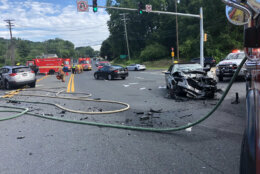 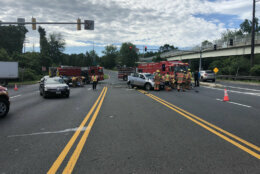 One woman was killed and three other people were seriously injured in a four-car crash Tuesday morning on Maryland 28/West Montgomery Avenue near the ramp for Interstate 270 in Rockville, Maryland.

The crash closed part of Maryland 28 and snared traffic in the area for several hours Tuesday as authorities investigated the crash.

The crash happened just after 9 a.m. Tuesday when two vehicles apparently collided and then two more vehicles crashed into the initial wreck, according to the Montgomery County Fire and Rescue Service.

All four people injured in the crash were initially trapped inside the vehicles before rescue crews freed them and taken them to a hospital. Montgomery County police later announced in a Tweet that one of the people involved in the crash, an adult woman, had died.

After being closed for several hours Tuesday afternoon, both lanes of Maryland 28 between Hurley Avenue and Nelson Street had reopened by 3:45 p.m.

Below is a map showing the general location of the crash: