Superintendent Jack Smith took the opportunity to provide updates on how the school system is tackling each issue at a news conference Thursday.

Dr. Jack Smith said the school system has developed a series of steps to deal with incidents of hate, and called vaping a serious health risk to students. He also said the death of a 9-year-old who was struck by a county school bus in December was an “incomprehensible tragedy.”

Smith took the opportunity to provide updates on how the school system is tackling each issue at a news conference Thursday at the Montgomery County Board of Education offices.

A nationwide ban on an array of flavored e-cigarette products went into effect Thursday. The ban focuses on cartridges and pre-filled pod devices such as those sold by Juul.

Smith didn’t offer specific numbers but said indications are that the number of students who vape appears to be increasing, and he said vaping presents risks to student health.

“In October, there were several incidents of students losing consciousness,” Smith said, adding that they had to be taken to hospitals.

The school system has launched a program that encourages students to create their own public service announcements on the hazards of vaping. There’s a contest, and the winner of the “Let’s Clear the Air” PSA contest will be announced next month.

The announcement will come during the school system’s anti-vaping symposium on Saturday, March 28 at the Montgomery County campus of Johns Hopkins University.

The school system has been developing a program to respond to incidents of hate and bias on school campuses. Deputy Superintendent Dr. Monifa McKnight outlined a series of steps that schools are taking to deal with cases, such as that of Silver Creek Middle School, where drawings of swastikas were found in November 2019 and in May 2019.

McKnight said that the school system is going to allow a form to report bullying, harassment and incidents of hate to be filled out online by students, parents and school officials. The form should be available online “in a couple of months,” McKnight said.

The school system has also developed protocols for its Behavioral Threat Assessment Team, which will track patterns of hate or bias-related incidents. There’s also an emphasis on “restorative” measures, designed to deal directly with students and families.

Guila Franklin Siegel, associate director of the Jewish Community Relations Council of Greater Washington, welcomed the approach by the school system. Her organization worked with administrators and staff at Silver Creek Middle School in Kensington.

Franklin Siegel said the school system has been open to working with community groups like hers. “They are taking this issue very seriously, but hate wasn’t created overnight, and it won’t be eradicated overnight,” she said.

The December death of a 9-year-old girl who was struck by a Montgomery County school bus driver after being dropped off in Bethesda has jolted the school community.

Smith was asked about what it was like to get the news about the girl’s death and learn that, soon after, a high school student had been hit and seriously injured as he crossed Montrose Road to reach his school bus.

“It’s such an incomprehensible tragedy for a family … I don’t have any words for how I feel,” Smith said.

He and Todd Watkins, the director of transportation services for Montgomery County Public Schools, explained that the school system reviews the location of bus stops and whether they could be made safer each year.

Watkins said the emphasis this year is “on the heaviest traveled and highest speed roadways first,” and reviews of residential roads will get another look.

Montgomery County also recently hired a “Vision Zero” coordinator, and Smith said he is optimistic that pedestrian safety can be improved. 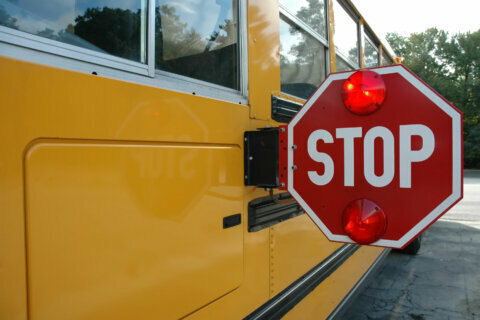 Boy seriously injured after he was struck by an SUV in Montgomery Co.