An articulated boom that was helping pour concrete struck overhead wires at around 12:30 p.m. and pitched him into the trench, according to Montgomery County Fire and Rescue.
Listen now to WTOP News WTOP.com | Alexa | Google Home | WTOP App | 103.5 FM
(1/2) 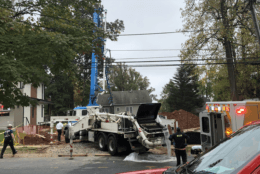 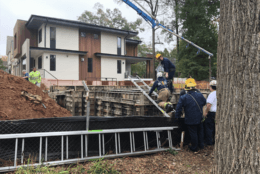 A worker died Tuesday afternoon after he was shocked and fell into a trench at a construction site in Bethesda, Maryland.

It took first responders about 15 minutes to retrieve the man after he fell into an 8-foot-deep foundation for a home being built along Wilmett Road, said Montgomery County Fire and Rescue spokesman Pete Piringer.

An articulated boom that was helping pour concrete struck overhead wires at around 12:30 p.m. and pitched him into the trench, according to the fire department.

“He was down in a confined space, in between the formation walls of this foundation, so it was a little tight down there,” Piringer said after the rescue. “Medics were able to get down there, provide advanced life support. … But again, it was a little difficult to get him out.”

The incident also downed the power line, at one point leaving about 1,200 customers without power.