A Glen Echo, Maryland, man's dogs helped get him rescued without injury on Sunday from a remote area where he might not have been noticed.
Listen now to WTOP News WTOP.com | Alexa | Google Home | WTOP App | 103.5 FM

Talk about man’s best friend. A Glen Echo, Maryland, man’s dogs helped get him rescued without injury on Sunday from a remote area where he might not have been noticed.

“It’s good the dogs came closer to the trail. That’s the nice part about it. That’s why we saw him,” said Steve Shollenberger, 63, of Damascus, who was one of two cyclists involved in the rescue at the C&O Canal tow path near Little Falls Dam.

“The dogs saved his life,” Capt. Eddie Russell of Montgomery County Fire Station 10 said. “Absent the dogs, there would have not been a trigger to get a cyclist or a hiker to slow down. He was 40 to 50 yards away from the C&O Canal tow path at the water’s edge.”

The 87-year-old hiker became so hopelessly stuck in mud along the edge of the Potomac River, he couldn’t even turn his body away from the river toward the tow path to call for help.

After walking down toward the river to investigate, one cyclist stayed with the man, while Shollenberger went back up to the path and called 911.

While Shollenberger waited at the path to wave in rescue teams, he said the other cyclist who carefully avoided getting trapped in the mud himself managed to position a small log behind the hiker so he could sit down to rest and begin to try to dig himself out.

The hiker, after being rescued by professionals had no injuries and is expected to be OK. And, both his shoes were recovered from the mud, which anyone who’s been stuck in mud before can tell you is unusual.

“It’s always a great day when you can help somebody, you know. Because he was an older gentleman, so he wasn’t going to get out of the mud by himself,” Shollenberger said.

The hiker was not carrying a cellphone, which might have helped prevent his ordeal from lasting as long as it did — an hour or more.

“Have a charged cellphone and pay attention to your surroundings, know where you are, for example how long it took you to walk from your car to the place where you may be,” Montgomery County Fire and EMS spokesman Pete Piringer advised.

Other tips, from Piringer to help hikers have enjoyable, safe trips: 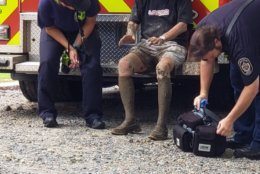 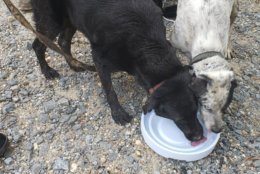 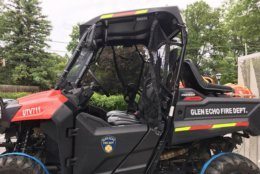