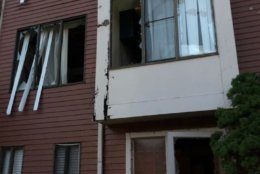 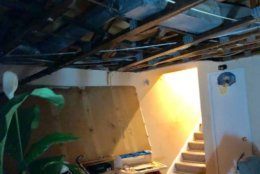 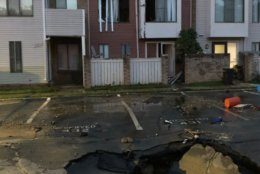 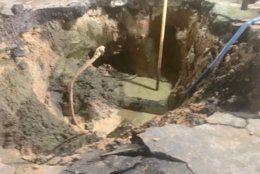 It happened on the 9600 block of Brassie Way. The break caused a massive sinkhole to open in the middle of the street.

Three town houses have been deemed unsafe, and crews helped occupants of these units to gather their belongings. The inspector said that so much water in such a short period of time put a load on the first floor of one of the town houses that collapse is imminent, Piringer said.

Piringer estimates some 40 people were relocated to a nearby community center. Emergency management personnel, including staff with the Red Cross, were on site.

As of 3 a.m. Friday, WSSC said that repairs were completed and water service was restored to the area.

So far, no injuries have been reported.

The Washington Suburban Sanitary Commission told WTOP that there were two other water main breaks in that same neighborhood this week.

WSSC inspectors are now looking at samples from all the broken pipes to determine the cause.

They said age could be a factor since pipes in that area are nearly 50 years old.

Dimelo Coreas shared this unbelievable video with me of a water main break in Montgomery Village’s Thomas Choice West neighborhood.
Residents tell me there was a smaller water main break yesterday as well. pic.twitter.com/k8Xh7XJbYr