A Silver Spring, Maryland, house was deemed a "total loss" Thursday afternoon as firefighters fought a large fire on the 200 block of Bryant's Nursery Road.
(1/4) 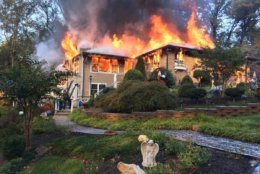 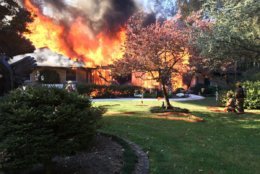 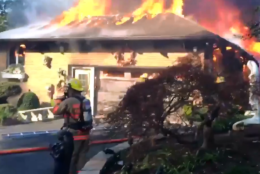 WASHINGTON — A Silver Spring, Maryland, house was deemed a “total loss” Thursday afternoon as firefighters fought a large fire on the 200 block of Bryant’s Nursery Road.

Montgomery County police noticed the blaze while patrolling the Colesville area of Silver Spring hours earlier and alerted the county’s Fire and EMS Department. At that time, the fire was already “fully involved,” said Pete Piringer, a department spokesman.

None of the home’s occupants were inside at the time, he said.

The two-story, 6,000-square-foot house is at the end of a long driveway with a small bridge, so access was a bit of a problem, said Piringer, who characterized the damage as a “total loss.”

The fire drew two alarms’ worth of personnel, he said, including a water supply task force. At 1:30 p.m. more than 75 firefighters were at the scene. The blaze caused the home’s roof to partially collapse.

The cause is not yet known.

Below is a map of the fire’s approximate location.