Members of Bethesda church rally to save historic burial site

BETHESDA, Md. — Members of a Bethesda church call it an “uphill battle,” but the congregation at Macedonia Baptist Church on River Road has gained support from groups around Montgomery County in an effort to stop a redevelopment project they say will re-desecrate an old burial ground. 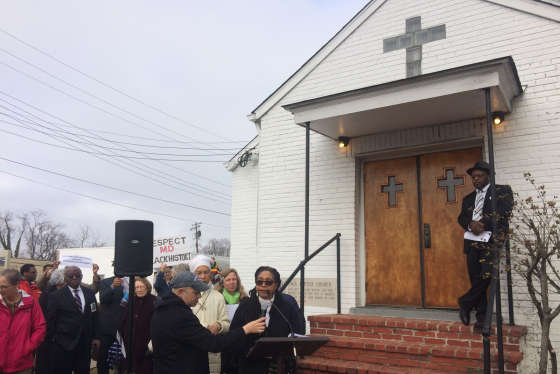 Developers paved over the church’s African-American burial ground in the 1950s. Church members say new development further threatens to disrespect the dead of the Baptist church.

The burial ground is already paved over, but the latest plans call for a parking garage to support the new development in the works. On Sunday, the church turned to organizations affiliated with Black Lives Matter to argue that race is a big reason the project slated for River Road, just north of Little Falls Parkway, might proceed.

“What they’re trying to do is essentially to bus us into a non-negotiable position,” said Marsha Coleman-Adabayo, whose husband is the church’s pastor. “What they’d like to do is talk about building all around the cemetery site and starting the actual process of surveying and building. … Then they’re going to put us in a position where we have to basically respond to what the builders have already done as opposed to looking at this project in a holistic way.”

The project will go before the Montgomery County Planning Commission on Thursday. In a move that recognizes the burial ground might be there, the commission said it will only review site plans for areas that aren’t part of the disputed land.  But some church members are suspicious.

“I think it’s kind of a [strategical] thing for them to set it up that way and kind of leave us out there like the Lone Ranger by himself,” said Matthews, a who grew up by the church.

He said he has relatives buried under the asphalt across the street from the church.

“I don’t think that was done in good intention for us at all. It was more so to be favorable to them, the builders, not us, at the churches,” he added.

Church leaders would like to see the planning commission postpone the meeting until it’s determined if human remains are buried at the site.  If that’s the case, some members of the county council have already said the project will need to be reconfigured.

Adabayo said it should become the site of a museum that tells the story of black enclaves in Montgomery County, similar to the one that used to exist on River Road.  She was joined at a rally Sunday by a few dozen supporters, including three mothers whose sons were killed during interactions with police officers.

“I know it’s a struggle, but through the graces and goodness of the Lord, I think we’ll make it,” said Matthews.