Coronavirus News: Fairfax Co. votes to increase substitute teacher pay | Is it time to get a COVID-19 booster? Which one? | Local cases of COVID-19 | How many in DC region are vaccinated?
Home » Montgomery County, MD News » 'Black Lives Matter' sign… 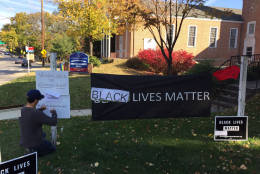 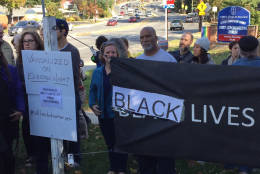 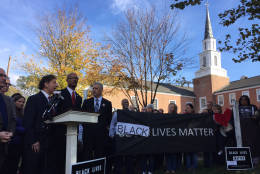 SILVER SPRING, Md. — On the night of the election, a ”Black Lives Matter” sign at a local church was vandalized, and some county and religious leaders claim the vandalism is connected to the heated and divisive presidential race.

The word “Black” was cut out of the sign, leaving the message “Lives Matter” outside Christ Congregational Church.

“Our country’s harmful campaign stoked feelings of fear in many residents of Silver Spring,” said the church’s senior pastor, Rev. Dr. Matthew Braddock, “and we feel that that fear is leading to messages of exclusion.”

“I’m nervous that we are going to see more acts of violence like this because this is the sort of activity that’s been normalized by the president-elect’s behavior over the last year and a half and enabled by the media,” added council member Tom Hucker.

But there were also messages of hope and reconciliation. Rev. Jeffrey Thames said that he and others felt love for the vandal or vandals. “We love you, too, so much that we are inviting you to come in and have a meeting with us, so that we can understand what it is that you’re feeling,” he said.

“We are a nation of many beliefs, many thought processes … at the end of the day we’ve got to be one Montgomery County,” said Jim Stowe, Director of the county’s Office of Human Rights. He also said that “this does not… go one way or the other” when it comes to which groups or individuals deserve protection, and anyone who feels their well-being has been threatened should call police.

In the two nights after Trump’s election, protesters across the U.S. have taken to the streets. Some of the protests have been mostly peaceful, but in other cities, anti-Trump protesters have blocked highways and vandalized businesses.