An intersection on River Road where three people from the same family were killed in a crash is getting a safety boost. But will it be enough to prevent further crashes?
Listen now to WTOP News WTOP.com | Alexa | Google Home | WTOP App | 103.5 FM
(1/4) 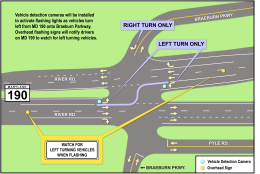 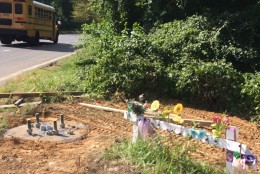 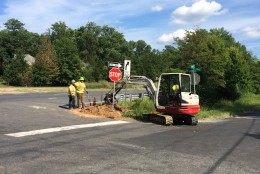 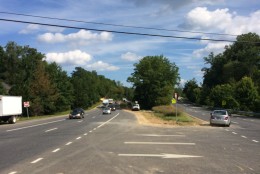 BETHESDA, Md. – Maryland State Highway Administration crews have begun work aimed at boosting safety at a River Road intersection where three members of one family were killed in a February crash. But neighbors who have complained for years about the intersection said the changes don’t go far enough.

Traffic-activated overhead flashing signs are being installed in both directions of River Road, which will warn when vehicles are turning left onto Braeburn Parkway.

“I think that the community will not find the improvements that are underway now to be anywhere near adequate,” said Richard Boltuck, of the Bannockburn Civic Association. “The alternative that the community very strongly preferred was to close the Braeburn intersection, regarding it as inherently dangerous,” he said.

A community meeting in May at Walt Whitman High School voted in favor of closing the intersection and creating a new intersection about 1,000 feet south on River Road, currently the site of a stand-alone pedestrian crosswalk mostly used by Whitman students.

On Feb. 27, Thomas Buarque de Macedo, 18, a Walt Whitman High School student, was killed along with his parents Michael, 52, and Alessandra, 53, as the family in a Chevy Volt turned left from River Road onto Braeburn Parkway to attend a school play. Thomas’ sister Helena, 16, survived the crash.

Police said Ogulcan Atakoglu, 20, of Potomac, was driving at 115 mph when he crashed into the Buarque de Macedos’ car. He pleaded guilty to three counts of manslaughter and faces sentencing in November. He is currently in jail.

The State Highway Administration safety improvements, expected to cost $300,000, are scheduled for completion by mid-fall.