WASHINGTON — When Ryan Alavi got up Friday morning, he looked out his back window and saw something in his koi…
Listen now to WTOP News WTOP.com | Alexa | Google Home | WTOP App | 103.5 FM
(1/4) 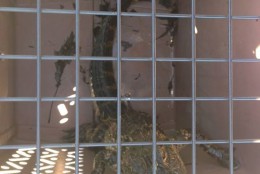 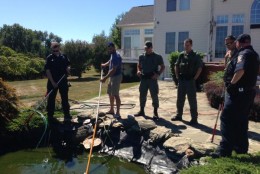 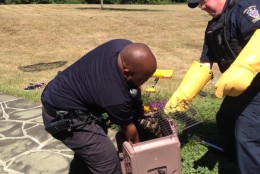 WASHINGTON — When Ryan Alavi got up Friday morning, he looked out his back window and saw something in his koi pond.

Thinking it was a snake, Alavi poked around, but he soon realized it was an alligator. He decided catching the sharped tooth creature was out of his league, so he called animal control.

“The dispatcher said, ‘I am pretty sure there are no alligators in Maryland,” Alavi said. “I said ‘I’m pretty damn sure there is one in my koi pond.'”

He watched Montgomery County police and workers with the Maryland Department of Natural Resources worked to get the three-foot gator out of the pond. They finally caught it in a net, pulled it from the pond and pushed it into a crate.

Officers from Montgomery County police, animal control and the Department of Natural Resources responded to a home on Denit Estates Drive in Brookeville at about 10 a.m. after the homeowner found the alligator in his pond.

Officers drained the pond and were able to catch the alligator.

“I got a front row view of a good alligator wrestling show,” Alavi said.

The gator ate one of the koi.

An alligator capture is not something Montgomery County police deal with often, says Officer Rick Goodale.

“I don’t remember the last time we’ve had a call about [an alligator]. It was unique when we heard about it,” he said.

“We are used to bears and other creatures, but alligators are not too common here.”

The gator has been relocated to the Catoctin Wildlife Preserve and Zoo in Frederick County.

The Department of Natural Resources police will conduct an investigation to determine how the gator found its way into the pond.