The world’s best pan pizza is in … Williamsport, Maryland?!

The guys from Rad Pies headed to Vegas for the International Pizza Expo hoping to pick up some tips on making a better pie. It turns out they already had some of the best.
Listen now to WTOP News WTOP.com | Alexa | Google Home | WTOP App | 103.5 FM

Pizza snobs, especially those who came to the DMV from somewhere else, love to scoff at the pizza in the D.C. region. It’s never good enough, and certainly not as good as what they had at home.

But what if they’re wrong about all of that?

A little pizza stand in Williamsport, Maryland, called Rad Pies shares space with a brewery in a business park that overlooks I-81. Co-owners Ken MacFawn and Chris Hubbard also own the White Rabbit Gastropub in Frederick, which also serves Rad Pies.

They went to the International Pizza Expo in Las Vegas with aspirations to pick up a few tricks and tips to make a better pie. It turns out they already had some of the best.

“We competed in three different divisions and placed in every division and actually won the World Pizza Championship for the pan division,” MacFawn said.

The expo drew competitors from 50 countries all over the world, MacFawn said: “This is competing against Sicilian pizzas from Sicily, Roman pizzas from Rome.” Deep-dish pizzas from Chicago and some of the best from New York also compete.

The Detroit-style pan pizza, called “In Crust We Trust,” was voted best pan pizza in the whole competition. The dough is made with a 1-to-1 flour-to-water ratio, and it sits for 24 hours before it ever sees an oven.

“Having that higher hydration allows this to evaporate and cook off when the baking process is happening, allowing for a lighter overall end product,” said Adam Hatfield, the chef and operator of Rad Pies.

And it’s loaded with three different types of pepperoni, some of which is baked into the outer edge of the crust.

“One thing that they do look for is creativity and innovation,” said MacFawn. “It’s one of those things that seems obvious but no one was ever doing it before.”

It’s the second year in a row that a local pizza maker has won at the competition. Last year, Andy’s Pizza, which started in Tysons and can also be found around D.C., won the top prize for best cheese pizza. The guys at Rad Pies said they talked with people at Andy’s for about four hours to get tips and advice leading up to the competition.

“Literally everything from A to Z, and just gave us that extra step of confidence,” said MacFawn. “They also were really excited about us competing because they wanted another World Pizza Champion around the DMV area to really showcase.”

He added, “We all know New York has put out awesome pizzas. We know Chicago does. But honestly, D.C. is on the map right now. There’s two back-to-back World Pizza Champions right here in the D.C. metro area.” 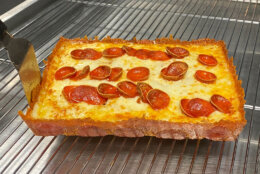 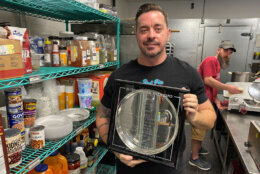 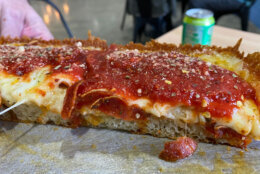 Initially, the focus was going to be on wood-fired Neapolitan pizzas — there’s a big, round oven with a rotating pizza stone that’s fired up to over 600 degrees. Hatfield said the addition of the Detroit-style pizza to the menus was something fun to try.

“Took it on and kind of dove super-deep into it,” he said. “Now we’ve kind of locked it in and obviously it worked out.”

“It makes me so proud,” Hubbard said. “Our original goal was to go out there and learn and figure out how do we compete, and also just improve the brand.”

Rad Pies opened right when the pandemic hit; Hubbard said there was a time where no one even knew whether they’d make it. The new hardware hanging up in the kitchen is extra sweet validation.

“It was a very interesting time for all of us, especially in this business,” said Hubbard. “We decided to push ahead and we knew this was going to be the thing, so this is our future now. It was the right investment. Always invest in yourself, right?”