A recent report by the state’s largest public employee union found stark wage disparities within the University System of Maryland.

For example, while Black workers comprise 11% of the highest-salaried employees within the university system, they make up 33% of the lowest paid employees.

These wage disparities offer another reason why it is important for the union to be able to negotiate directly with the USM in “one master contract” for system-wide policies such as wages and benefits, said Patrick Moran, the president of AFSCME Council 3. USM is the last state entity that is paying below $15 an hour, he said.

“Too often in the past, when bargaining at the campus level, local management has refused to negotiate certain terms and conditions with our union,” Moran continued. “They have said they do not have the authority to bargain on a range of topics — including health and safety, wages and other working conditions — because the university system writes, authorizes and executes policy throughout the USM.”

After the last legislative session, Gov. Lawrence J. Hogan Jr. (R) vetoed Senate Bill 9, which would have required the chancellor of the University System of Maryland to act on behalf of all the system’s institutions in all aspects of collective bargaining, consolidating the process at the top.

Currently, across USM’s 12 institutions, 16 different contracts are negotiated, according to AFSCME Council 3. When an individual campus reaches an agreement with a bargaining unit, it must then get approved by the system-wide chancellor. If rejected, the bargaining process starts over again.

Not only is this an inefficient system, but it is also expensive and perpetuates wage gap disparities, AFSCME Council 3 leaders argued.

Separate wage negotiations with each campus are inadequate because the University System is the ultimate decision-maker on each institution’s budget, said Katie Mostris, communications director of AFSCME Council 3.

Individual institutions have told the union that they do not have control over wages since they are budgeted a certain amount of money. But when the union turns to USM to negotiate wages, USM says they are not a bargaining agent, Mostris said. This allows wage increases to often happen at the discretion of the employee’s manager, she continued.

“The individual campuses don’t have any urgency to negotiate,” Mostris said. “There are no checks on how wages are distributed within the USM.” But if Senate Bill 9 goes into effect, the union will have a new right to discuss job classifications and can ensure there are structures in place that prevent biases, Mostris said.

The only school within USM to have a $15 an hour minimum wage is University of Baltimore. Colleges outside of USM such as Morgan State University, St. Mary’s College of Maryland and Baltimore City Community College also have a $15 minimum wage.

This means the University of Baltimore is going to be paying more to its employees than University of Maryland Baltimore, which are only 10 minutes apart. Both institutions are under USM and are getting money from the same budget, but without a centrally negotiated wage policy, “it leaves the system open to more disparity,” Mostris said.

“Frontline workers deserve living wages, but many of us across campus in the USM don’t make even $15 an hour,” said Charles Burrell, a moving and storage specialist at the University of Maryland Baltimore and a member of AFSCME Local 1839. “We deserve living wages that are enough to live on with just one job.”

Union leaders say they expect that the General Assembly will override Hogan’s veto in the next legislative session and thus are trying to negotiate with USM to no avail. “The USM will have wasted months delaying negotiations” by the time the legislation takes effect, said Cherrish Vick, secretary-treasurer of AFSCME Council 3.

USM does not have the legal authority to engage in consolidated bargaining on behalf of all its institutions with AFSCME Council 3, Mike Lurie, the spokesperson for USM, said in an email.

“However, the system stands ready to engage in consolidated collective bargaining as soon as SB 9 becomes law. Already some USM institutions have entered into separate negotiations with AFSCME over issues that include a $15.00 minimum wage — and several others have offered to do so and are waiting for a response from the union,” Lurie continued. 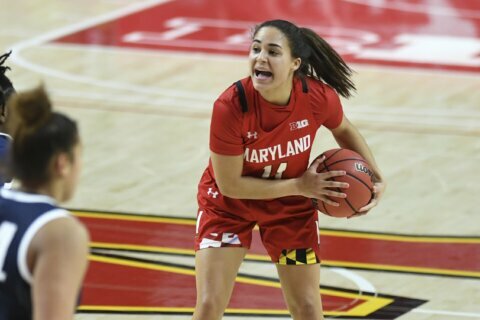