Artifacts recently found at the site of a 386-year-old fort in Southern Maryland are helping tell the story of Historic St. Mary’s City, the region and the U.S.
Listen now to WTOP News WTOP.com | Alexa | Google Home | WTOP App | 103.5 FM
(1/7) 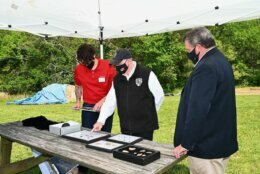 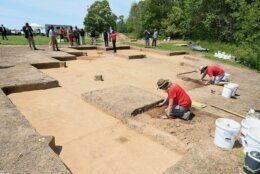 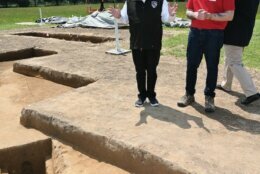 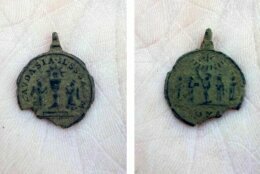 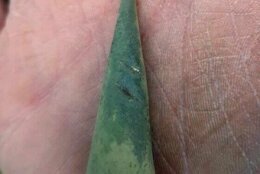 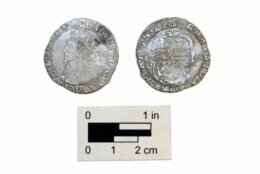 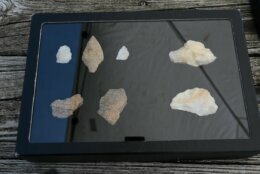 Artifacts recently found at the site of a 386-year-old fort in Southern Maryland are helping tell the story of Historic St. Mary’s City, the region and the U.S.

A coin establishes the fort’s 1634 date; a medallion reflects the colony’s commitment to religious freedom, and what’s known as a Tinkling Cone likely was used for trading with Native Americans.

“This is an important moment in Maryland history,” said Travis Parno, director of research and collections at Historic St. Mary’s City.

The fort’s recent discovery and its artifacts help to tell the era’s story from both a colonial perspective and a Native American historical perspective.

“This was a moment of intrusion, when colonists inserted themselves into this socially and politically complex world of native peoples, and a lot of change and conflict resulted in the following couple of centuries,” Parno said.

Close to the fort are two early Native American archaeological sites, one that’s thousands of years old. And, excavations at St. Mary’s Fort are part of a larger project that’s been designed in collaboration with members of the Piscataway Conoy Tribe, the Piscataway Indian Nation and other groups of native people.

The goal of the People to People Project is to create interpretive experiences for visitors that might include signage, reconstructed buildings or camp sites, and the staging of performances and educational programs.

“And all of this will be designed to tell the entire breadth of human history in this region. Beginning when the first native peoples came here 12,000 to 13,000 years ago and leading up to that moment when everything changed when the colonists arrived in 1634,” Parno said.

Here are some of the artifacts presented to the public Wednesday during an event attended by Gov. Larry Hogan:

The King Charles I silver shilling helped verify the date of the fort’s construction. It was a rare find, because tobacco was Maryland’s main currency at the time.

Parno said that using archaeology to tell stories can be like detective work, and exact dates can be hard to nail down.

“I joked with my field team, I said — ‘If you could find me a coin with 1634 on it — that would really help. That would get us to where we need to go with this story,’” Parno said. “But they did find a King Charles I silver shilling that was struck at the Tower of London, and it has a maker’s mark on it — a little stamp that indicates it was made in either 1633 or 1634.”

Tinkling cone: Thin sheets of copper alloy rolled into a cone would have been strung on a knotted leather cord to be worn on clothing or in the hair.

“These were very commonly produced in Europe for trade with native peoples,” Parno said. “Native peoples on the east coast believed strongly in the important spiritual power of copper.”

Five saints medallion. It depicts five saints canonized by Pope Gregory XV in 1622: Ignatius Loyola, Francis Xavier, Philip Neri, Theresa of Avila and Isidore of Madrid. Loyola and Xavier are Jesuit saints who have been featured on other religious medals found at Historic St. Mary’s City. They may have been used trying to convert native people to Christianity.

“Trying to convert them using baptism but also using material culture like these religious medals to give to people as a reminder. ‘This is what we stand for. These are the symbols of our faith,’” Parno said.

The colony of Maryland was founded by the Calvert family. Parno said the family envisioned it as being a place open to the free exercise of all Christian religions.

“It was an important vision. One that sort of made its way into the U.S. Constitution many years later.”

Back in the Day | Local News | Maryland News