Business owners aren’t sure if the light at the end of the tunnel is a prosperous future or an oncoming train, so Maryland legislators are looking to help out.
Listen now to WTOP News WTOP.com | Alexa | Google Home | WTOP App | 103.5 FM

The Purple Line promises an economic jolt for businesses that span its route from Bethesda to New Carrollton, but some business owners say they aren’t sure if the light at the end of the tunnel is a prosperous future or an oncoming train, prompting Maryland legislators to look into providing financial support.

Everyone expected the construction of the Purple Line would lead to some disruptions for the streets and businesses near its path, but the duration of that disruption is far longer than some businesses expected.

It’s led Maryland Delegate Jheanelle Wilkins to push a bill that would set up a pool of $5 million in grant money that affected businesses can show how they’ve been hurt by the construction happening around them.

The grant money would be available starting in October through 2024, or whenever the money runs out, which ever happens first. It would be available for businesses that employ 14 people or less, though that number could change as the bill moves through Annapolis.

“The Purple Line will transform our neighborhoods by providing fast, direct and more reliable east-west transit service, and will have a major economic boost for our businesses in the long run,” Wilkins told members of the House Ways and Means Committee on Thursday. “But given the impact of this state project it’s critical that we take swift action to ensure that small and microbusinesses, which are seeing a severe decrease in their revenue as a result of construction, are able to thrive and survive during and after the construction of the Purple Line.”

If the bill were to pass, it would be an unprecedented move — something that hasn’t been done for any other state project before.

And some members of the Ways and Means panel made clear their skepticism about going through with the bill.

But others said the sheer size and length of the project makes this one different.

“When the electricity gets cut off, on and off, we’ve had to replace two fans for our coolers because it’ll happen within an hours span — on and off, on and off — and they’ve explained to us that it’s from the construction,” said Ana Rivera, whose family runs El Gavilan restaurant in Silver Spring.

“The expenses are still there. Our rent is going up every year.”

Another restaurant owner, Ganesh Gamir, told lawmakers he’s already had to lay off workers from the restaurant he’s owned for almost 22 years.

“If I laid off more people I cannot run the restaurant, I have to close,” he said.

He added that some days he ends up losing money because the cost to fill up the buffet he has at lunch ends up being more than the amount of money that comes in from customers.

“It’s a very difficult time right now. I don’t know. This restaurant is almost 22 years. I don’t know we’ll sustain that long if we do not get any help,” Gamir said.

Other local government leaders testified in favor of the bill, including Suzanne Ludlow, the city manager of Takoma Park.

She said some of the work will lead to work zones being in front of some businesses for nearly two years — a time frame no business can survive without any help.

And she said the impact is being felt beyond just the owners, to include employees and other businesses too.

“The toll on the businesses is high, 30-40% drop in revenue,” said Ludlow. “Businesses are laying off staff … their vendors are hurt because they’re not selling as much product. The stories are heart wrenching.” 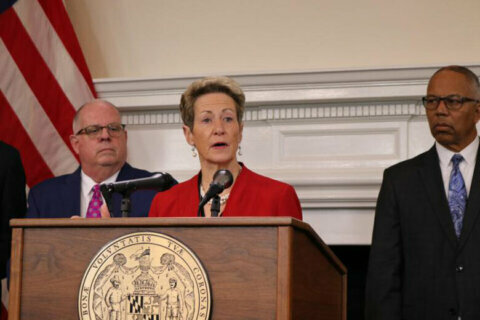