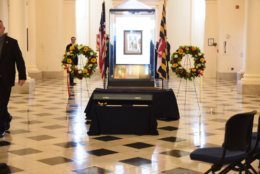 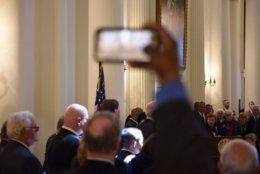 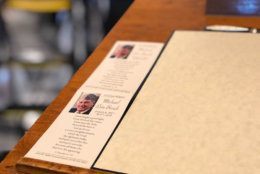 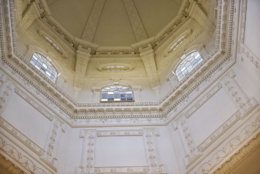 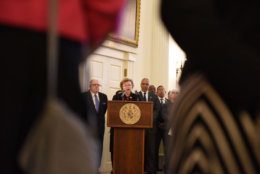 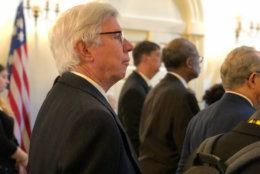 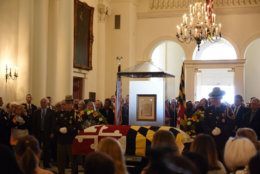 Exactly one week after the Maryland General Assembly session ended, the casket bearing the late state House Speaker Michael Busch was brought into the Maryland State House to lie in state.

Busch, who was 72 years old, died after he was hospitalized for pneumonia. He was the longest-serving House speaker in Maryland history, and he would lie in state in the oldest state house in continuous use.

Maryland Gov. Larry Hogan was first to speak after Busch’s casket was brought into the state house and placed in the rotunda.

“Mike Busch dedicated the greater part of his life in service to his state,” Hogan told the assembled crowd. “And he left Maryland a better place than when he found it.”

Hogan added, “Few have served Maryland with as much passion and dedication as Mike Busch did. And few will leave this earth as well-loved and esteemed as he was.”

“Thank you for sharing your husband and your father with the Maryland House of Delegates. Those of us who served with him know that the job and the role he loved most was being a father.”

“We heard about almost every game, we know every score you made,” McIntosh said to his daughters.

She joked that Busch’s colleagues also knew about every ACL tear and knee injury, but then told Busch’s daughters, “You did just as your father would have done. You just kept fighting through an injury and returned to the sport that you loved. That’s just the way your father lived his life.”

In a voice choked with emotion, McIntosh said, “There are no words big enough or loving enough to describe what Michael Erin Busch gave to those of us who served with him.”

She concluded, “Rest in peace, my speaker, our leader and our friend.”

Adrienne Jones, House speaker pro tem, said while many knew Busch as “coach,” he could also have been a psychologist.

She said he would always ask how his colleagues were doing and ask, “What’s on your mind? Talk to me about it; come into my office.”

Former Sen. Barbara Mikulski addressed those gathered in the state house, saying of Busch, “He coached us all on how to do our job with honor, with integrity, and also to make sure that we are now and forever forward, Team Maryland.”

Hundreds of people filed into the state house to pay their respects, and among them was Will Scott, who lives in Busch’s district.

Scott, who ran for office in Annapolis, said Busch was a mentor to him.

“I didn’t win, but that wasn’t his fault!” Scott said with a smile. Scott explained he knew Busch for more than 30 years, before Busch became a leader in the legislature.

“If you met him on the street, he was the same humble guy the last time I saw him a couple of weeks ago, as he was the first time I met him. That says more about a person than almost anything else in my book,” Scott said.

Carla Anderson, who describes herself as having been born and raised in Annapolis, said she felt compelled to pay her respects for several reasons.

“It’s history. He’s been the House speaker the longest, and he was here right up until his death. That’s dedication,” Anderson said.

She added that she met Busch several times, and he had visited her church.

“He’s someone who was about the people and wanted to make a difference,” Anderson said. She was sure that will be evident in the turnout at Busch’s funeral set for Tuesday at St. John Neumann Church in Annapolis.

“Whoever comes behind him is going to have some tall boots to fill,” she said. 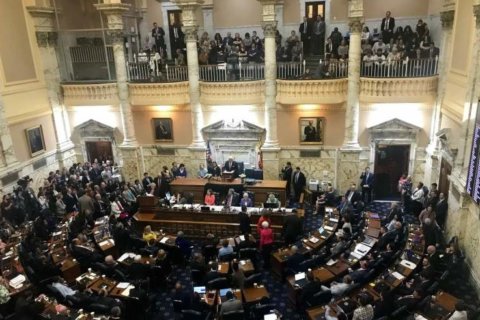 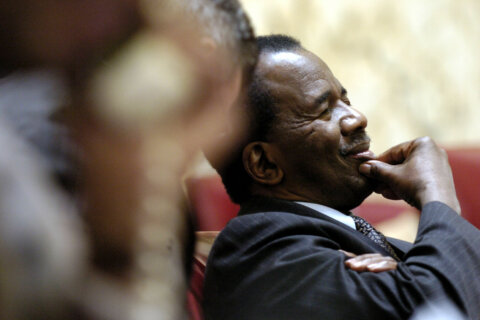