Home » Maryland News » What does ‘The China…

What does ‘The China Syndrome’ have to do with Calvert County and the climate crisis?

As policymakers scramble to find alternatives to fossil fuels, should nuclear energy be part of the equation? That’s a question that Maryland lawmakers are beginning to contemplate. A nuclear accident would be a disaster — but compared to the looming climate disaster, it’s a risk that a variety of experts say might be worth taking.

“The China Syndrome” was on Turner Classic Movies the other night — taut and suspenseful as ever. The story, about a near meltdown at a fictional California nuclear power plant, was exquisitely timed: The film was released 40 years ago, just days before an accident at the Three Mile Island nuclear plant near Harrisburg, Pa., almost caused a real meltdown.

Undoubtedly, if you watch the movie today, it’s dated, but it’s still dramatic and entertaining as hell, with a stellar cast: Jane Fonda, buoyant and glamorous; Michael Douglas, young, manly and hairy; and Jack Lemmon, oozing decency and integrity.

Lemmon, who played a shift supervisor-turned-whistleblower at the nuclear plant, is no longer with us, sadly, while Fonda and Douglas, who play crusading TV journalists, are currently starring as oversexed senior citizens on highly-acclaimed TV shows. 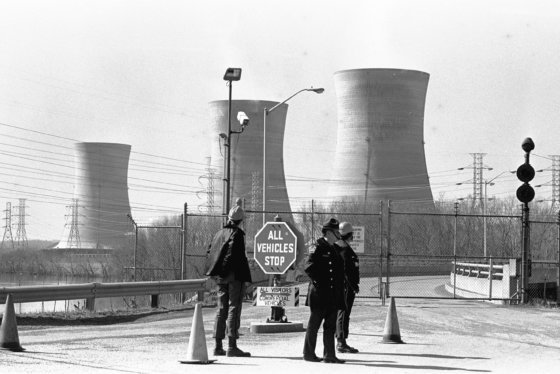 The Three Mile Island nuclear reactor partially melted down 40 years ago on March 28, 1979. See photos from the disaster.

If you were around then, it’s hard to forget how terrifying the one-two combination of the movie and the real event was — especially if you lived on the East Coast, upwind or downwind from Harrisburg. I recall that in my local convenience store in New York City, a quart of milk from Pennsylvania that week cost just a fraction of what a quart from upstate New York was going for, amid fears that the Pennsylvania cows had come into contact with nuclear radiation. Needless to say, the shelf of Pennsylvania milk went untouched.

Now here we are, with the 40th anniversary of the Three Mile Island disaster on Thursday. If you had told me then that some people might today be looking to nuclear power as the savior of the planet, I would never have believed you.

And yet that’s where we may find ourselves, as the Earth burns up at a frightening rate. It is abundantly clear that the U.S. and the world must wean themselves from their dependence on fossil fuels. It’s equally clear that we must up our use of renewable energy as quickly and efficiently as possible.

But as policymakers scramble to find alternatives to fossil fuels, should nuclear energy be part of the equation? That’s a question that Maryland lawmakers are beginning to contemplate.

This year, Del. Mark N. Fisher (R-Calvert), whose Southern Maryland district includes Calvert Cliffs, the state’s only nuclear power plant, introduced legislation to include nuclear as a so-called tier 1 fuel that could be used as part of the state’s renewable portfolio. Current law requires state utilities to get 25 percent of their power from renewable fuels; the much-debated but still-stalled Clean Energy Jobs Act would boost that figure to 50 percent by 2030.

When Fisher’s bill appeared to be going nowhere, he amended it to instead mandate a study on the future of the nuclear industry in Maryland. The recast bill made it out of the House Economic Matters Committee by a 20-to-1 vote, and then passed fairly easily on the House floor last week.

But minutes later, several Democrats changed their vote from yes to no. It was not enough to alter the outcome, but it illustrated anew how many liberals feel conflicted about nuclear power.

With less than two weeks left in the General Assembly session, it’s hard to say whether the study bill will survive. There is no comparable bill in the Senate, and the measure got out of the House after the all-important “crossover day.” It has been referred to the Senate Rules Committee but has seen no action yet.

When Fisher’s bill was in its original posture — to use nuclear power as part of the calculation in the renewable portfolio standard (RPS) — representatives from several groups: the Utility Scale Solar Energy Coalition of Maryland; the PJM Power Providers Group, a nonprofit consortium of power providers; and the Sierra Club, testified against it. Part of their argument was that using nuclear power as part of the RPS would hamper the development of other renewable fuels, such as solar and wind energy.

“Our RPS should be firmly focused on promoting and incentivizing new, clean electrons on the grid like wind and solar, not providing handouts to large nuclear power plants,” the Sierra Club said in written testimony.

But with that competition no longer an issue and the bill now merely setting up a study about nuclear energy, environmental groups do not appear to be moving to oppose it. What a difference a couple of generations makes.

Apart from the potentially apocalyptic consequences of a nuclear plant meltdown, nuclear energy is now seen as a “clean fuel,” or at the very least a “bridge fuel,” linking the fossil fuels era to a day when solar and wind can thrive. Nuclear waste disposal remains a problematic and dangerous challenge, with no set U.S. repository at the moment. But for most people, that problem seems very remote.

A nuclear accident would be a disaster — but compared to the looming climate disaster, it’s a risk that a variety of experts say might be worth taking. The nuclear industry has a pretty good safety record, and if it stays that way, the chances of an accident are slim. In comparison, there seems little that can stop the accelerating climate disaster. A robust nuclear portfolio can help, a little.

The economics of the industry complicate the picture further: Nuclear power plants are expensive to operate and are slowly being shuttered as a result. The last new nuclear power plant in the U.S. was completed in 1990 and received its commercial operating license in 1996. In other words, a day will come when nuclear plants won’t be around anymore.

But until that day comes, they may remain, astonishing as it is to contemplate for those of us who youthfully marched in anti-nuclear protests in the late 1970s and early 1980s, a short-term and partial solution to the climate crisis. That’s as improbable a development as the one at the end of “The Pepsi Syndrome,” the classic and hilarious “Saturday Night Live” parody of “The China Syndrome” that aired on April 7, 1979, and was co-written by one Al Franken.

If you can find it online, it is worth a few minutes of your time. Just try not to think of, oh, Fukushima as you’re laughing.