Fight for $15: Md. lawmakers hear from both sides on boosting minimum wage

Efforts to get a $15 an hour minimum wage in Maryland by 2024 went into high gear Friday as members of a House panel heard from dozens of people on both sides of the issue.
Listen now to WTOP News WTOP.com | Alexa | Google Home | WTOP App | 103.5 FM

WASHINGTON — Efforts to get a $15 an hour minimum wage in Maryland by 2024 went into high gear Friday as members of a House panel heard from dozens of people on both sides of the issue.

She told the panel that raising worker pay is a moral imperative and added, “What I say is that we cannot afford not to raise the minimum wage.”

Anne Arundel County Executive Steuart Pittman told the House members, “The cost of not increasing the minimum wage to $15 an hour is a cost on taxpayers.”

Pittman explained that when people’s paychecks don’t cover their basic necessities, they then look to government assistance to close the gap.

In Montgomery County, the move to get to $15 an hour is already being phased in over a period of years. Currently, the wage is between $12 and $12.25 an hour. Back in 2013, the neighboring jurisdictions of Montgomery and Prince George’s counties agreed to enact legislation to raise the minimum wage to $11.50 an hour by 2017.

Montgomery County Executive Marc Elrich testified in favor of House Bill 166 along with Alsobrooks and Pittman.

Elrich said when the county bill was being debated, there was concern that businesses would leave the county when the pay rate went up.

State Del. Steve Arentz, a former business owner who sits on the committee, questioned the county executives and said there’s a difference between their counties and his Eastern Shore district.

“Most of our business is retail or farming. We don’t have the industry or businesses that your counties have right now.”

He added, “For us, this is going to be a major heartbreak.”

Elrich argued the boost in the minimum wage could actually generate benefits that would accrue to small businesses.

“When folks get more money, even in our communities, that money gets spent locally. I think every dollar that gets paid there is a dollar that’s going to be spent there,” Elrich told committee members.

Del. Seth Howard, a Republican from Anne Arundel County, said that bills to raise the wage had been brought before lawmakers repeatedly over the past few years.

He asked Pittman, “Why do you think after four wage increases over a four-year period, we’re back asking the same questions and trying to answer it through raising the minimum wage?”

Pittman replied without hesitation, “Because we did not raise it enough.”

Del. Chris Adams, a Republican whose district includes Eastern Shore counties, worried that businesses would be put in a position where they’d have to lay off workers.

“I’ve had to look at people who I like very much and say, ‘I’m sorry,'” Adams said. He struggled to find the right word to describe having to tell someone they were out of a job.

“That is a disgusting feeling, and there are thousands of businesses that are getting ready to have to do that,” he said.

The committee also heard from business owners who support the bill. Alissa Barron-Menza, vice president at Business for a Fair Minimum Wage, said her group represents businesses that support the “Fight for Fifteen.”

Barron-Menza said small businesses are already losing out to big-box stores who pay above the state minimum wage. Target and Costco pay close to $15 an hour, “Amazon, including Whole Foods, went to $15 in November,” she said.

“We all agree we’d like to help people that need help the most and do something to lift people out of poverty,” he said, but added the state had already increased the minimum wage five years in a row. Hogan asked, “But are we helping those people, or are we costing jobs?”

The governor was also worried about endangering the state’s competitiveness when it came to attracting businesses. He noted that Virginia’s minimum wage is $7.25. He said it’s possible businesses would choose Virginia over Maryland based on the wage disparity.

“How much of an impact does that have on our economy?” Hogan said, concluding, “Let’s make sure whatever we do, it’s done with a whole lot of thought and that it helps rather than hurts.”

Once House Bill 166 is voted on by the committee, it would be sent back to the House for a second reader. 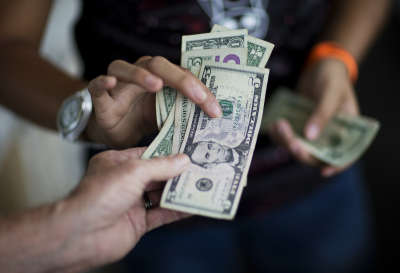