Nearly a week after the previous chair announced he was stepping down, a new chair was elected Wednesday who promptly apologized to the family of student-athlete Jordan McNair. The board's reaction to his death has led to a slew of departures from the university's administration and the football team.
Listen now to WTOP News WTOP.com | Alexa | Google Home | WTOP App | 103.5 FM

WASHINGTON — Nearly a week after the previous University System of Maryland Board of Regents chair announced that he was stepping down, a new chair was elected Wednesday in the system’s latest step after the death of student-athlete Jordan McNair.

Linda R. Gooden, a retired Lockheed Martin executive who was appointed to the board in 2009, takes the helm from James T. Brady, who resigned last week.

McNair’s death in June, after a Terrapins football team workout in May, sparked investigations into not only how his health was handled at the time but also into the culture of the football program at the College Park campus.

Following the reports, coach DJ Durkin and athletic director Damon Evans were set to be reinstated to their positions, with university President Wallace Loh retiring in June.

But, shortly after the board’s recommendation last month and amid pushback from students, faculty, and public and state officials, Loh announced Durkin’s departure as head football coach.

A day later, Brady, who had made the announcement that the school would keep Durkin as coach, stepped down as board chair.

In a statement the board released announcing the new chair pick, Gooden addressed how the board has handled reports on McNair’s death and the school’s football program, saying that “the board — in the minds of many — lost sight of its responsibility to the university system.”

“While the board’s decision was far from unanimous, and many members voted a different way, everyone on the board now understands that the board’s personnel recommendations were wrong,” Gooden said in the statement.

She then went on to apologize to McNair’s family, the university and Maryland residents.

“Our goal as a board is to govern in a manner that affords every student an opportunity for a safe, affordable and quality education experience,” she said. “Under my leadership, this board will accomplish that goal by recommitting to the principle of shared governance.”

Gooden has a bachelor’s degree in computer technology from Youngstown State University and a Master of Business Administration from the University of Maryland University College. 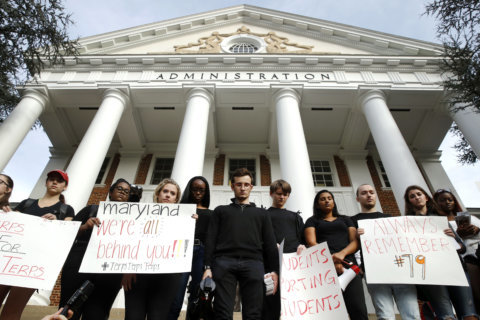