One day after an announcement that his job had been spared, DJ Durkin is out as the head football coach of the Maryland Terrapins. University President Wallace Loh confirmed DJ Durkin's ouster Wednesday night.
Listen now to WTOP News WTOP.com | Alexa | Google Home | WTOP App | 103.5 FM

WASHINGTON — One day after an announcement that his job had been spared, DJ Durkin has been dismissed as the head football coach of the Maryland Terrapins.

His dismissal comes in the wake of the death earlier this year of Jordan McNair, a 19-year-old who collapsed from heatstroke during a practice and died in the hospital two weeks later.

“This is not at all a reflection of my opinion of Coach Durkin as a person. However, a departure is in the best interest of the University,” Loh said. “This is a difficult decision, but it is the right one for our entire university.”

The Washington Post’s Rick Maese tweeted that Durkin was not being fired for cause, and that the university would buy out his contract. The firing comes in the third season of a five-year, $12.5 million contract Durkin signed in December 2015. He will be owed about $5.5 million, according to buyout terms of his contract.

Hired after serving one season as defensive coordinator at Michigan, Durkin had a 10-15 record at Maryland. The Terrapins went 6-7 in his first season, losing to Boston College in the Quick Lane Bowl, then fell to 4-8 in 2017 while coping with injuries to three different quarterbacks.

Durkin began his coaching career as a graduate assistant at Bowling Green in 2001 after playing four seasons there as a defensive end and outside linebacker.

He served three years as an assistant coach at Stanford from 2007-9 and was at Florida from 2010-14, spending the last two years as the Gators defensive coordinator.

Shortly after, ESPN published an article asserting a “toxic” environment inside the football practice.

A special committee was formed to investigate the culture of the Maryland football program, which the University System of Maryland Board of Regents later took over.

Backlash to Board of Regents

The board’s Tuesday announcement that they would allow Durkin to return to the field drew swift backlash. Maryland Gov. Larry Hogan released a statement Wednesday condemning the board’s decision, saying, “I am deeply troubled by the lack of transparency from the Board of Regents, and deeply concerned about how they could have possibly arrived at the decisions announced yesterday.”

“I share the concerns of many Marylanders and believe very strongly that more must be done to restore the public trust,” Hogan said.

“While the university system is required by law to operate independent of political influence, and as such no governor has the ability to hire or fire any university personnel or members of the Board of Regents, I can and will demand that the university is held accountable for making the reforms they have pledged to put in place with the full transparency that the students, parents and faculty expect and deserve,” Hogan said.

Democratic gubernatorial candidate Ben Jealous said in a statement that he was relieved to learn that Durkin had been fired, calling the board’s previous decision “shameful.” He called for a “full reset” of the university’s athletic department, including the removal of athletic director Damon Evans. Jealous also questioned the ability of board Chair Jim Brady to lead the institution.

“Dr. Loh’s firing of Coach Durkin is the right decision and the decision that had to be made if the U.Md. community was going to ever move forward,” said Rep. Anthony G. Brown.

The University Senate had also taken action by calling an emergency meeting. In a statement released Wednesday, it called the board’s actions “a direct attack on academic freedom and shared governance” and said that their decision was reached on “suspect motivations.”

“If [the board] can take such action regarding a coach, they can certainly do the same with a faculty member, a staff member, a department or program, or an administrator,” the statement read. “This goes to the very heart of shared governance: Who makes decisions on what is best for the university?”

An emergency meeting was set for Friday to propose a resolution condemning the board’s actions.

“Coach Durkin was a cancer to the University of Maryland football program,” McNair said. “I commend Dr. Loh for having the courageous effort to make the decision under hard circumstances to let Mr. Durkin go.”

In College Park, the Student Government Association had been debating a resolution calling for the coach’s firing Wednesday night when SGA President Jonathan Allen delivered the surprising news.

After a stunned silence, the students reacted in applause.

“I could not imagine — and as the McNair family mentioned — how any parent would send their kid to play under coach Durkin after having the death on his watch,” Allen said.

Allen said the Board of Regents ignored the McNair family’s wishes and that Loh made the “morally correct” decision to fire Durkin.

Matt Canada is expected to resume the role of interim coach. Maryland is 5-3 heading into Saturday’s home game against Michigan State. 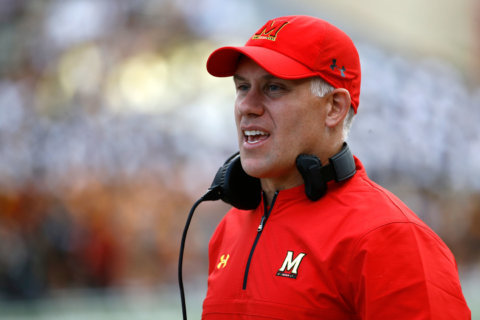 Some U.Md. football players disagree with Durkin decision. But what can they do about it?