His last marathon: Navy vet, 73, runs to honor those who didn’t make it home

Sid Busch, of South Carolina, will run the Marine Corps Marathon to honor a fallen soldier. The soldier's family, who will reunite with Busch at the end of the race, says Busch knows more about their pain than he initially lets on.

At 73 years old and with more than 200 marathons to his credit, Sid Busch, of Columbia, South Carolina, knows a lot about running and a lot about pain. More, in fact, than he lets on.

He’s got lots of achy joints and ligaments and trips to the surgeon’s table. Busch knows there isn’t a whole lot of running left in his tank. But while pain may keep him from running much longer, it’s also what’s kept him running so long.

For 26 years, Busch served on submarines before retiring as a chief petty officer in the Navy. On 9/11, he lost a close cousin in the collapse of the twin towers and said it was then that he was ready to sign up with the military again.

It turned out that the Navy wasn’t exactly clamoring for 55-year-old reenlistees. But as wars raged on in the Middle East, and as the casualties suffered in them started generating fewer headlines, Busch began to lament the dead who were gone and forgotten.

“I do all my races now in honor of young men and women who didn’t make it back from the Mideast and the war against terrorism,” Busch said last month outside a motel in Waldorf, Maryland, where he stayed after running a 10K.

He runs 5Ks, 10Ks, half-marathons and marathons, always with the picture of a fallen member of the military on his back. At the end of the run, he gives his finisher’s medal to their family.

The first few times, Busch would go online to look up the families of those who died and ask their permission to run with someone’s name and picture. But when his efforts became publicly known, the dynamic turned around.

“Now I get emails from families asking me if I’ll do them the honor of running for their son and daughter,” he said, choking up a bit as he spoke.

Over the years, the emails piled up in Busch’s inbox faster than he could run races. And his age didn’t stop ticking up either. Now he carries the names and faces of two fallen soldiers on his back every time he runs a race.

And while he’ll still do some shorter races, this weekend’s Marine Corps Marathon will be the last marathon he runs. As a veteran, he said, it’s just more special for him.

Last year, an injury kept him from running, but he still volunteered on the course and positioned himself along the Blue Mile. When he runs a race, the Blue Mile always slows him down because he stops to salute and honor each photograph.

“I have running shoes twice as old as these kids,” said Busch.

Running for a Md. Marine

One fallen soldier on Busch’s back this weekend will be Staff Sgt. James Malachowski, who grew up outside of Westminster, Maryland. He was killed by an improvised explosive device (IED) while deployed in Afghanistan, where he was deployed after three tours in Iraq. Busch said the story surrounding his death led him to reach out to Malachowski’s parents to run his last marathon in his honor.

He was married with two kids, but the night before Malachowski was deployed, he had an emotional and chilling conversation with his mother, Alison, who also served in the Marines.

“He put his big hands on my shoulder … and said, ‘Mom, I need you Marine to Marine,’” said Alison Malachowski. “So he didn’t want to talk to his mother; he wanted to talk to another Marine.”

That might have been so, but Alison couldn’t help but listen as a mother as well.

“He said, ‘Mom, I’m not coming back this time. I just don’t want people to forget I ever lived,” said Alison. “I started to cry. To have your child look in your eyes and tell you that [he’s] going to die – it was and still is an endless nightmare that we live 24/7. It doesn’t go away.”

“At 25 you shouldn’t be thinking thoughts like that,” said Busch. But Jimmy, as Alison called him, was right.

“He was killed by an IED,” Busch said. “He was literally blown in half and his last words were, ‘Are my men OK?’ The word ‘hero’ is thrown around a lot. That’s a hero.”

In Alison’s mind, Busch is a “national treasure.” When he runs the marathon this weekend, he’ll be carrying out her son’s dying wish, she said.

“People seeing Jimmy’s face and knowing who he is — not just a name, he’s a person — means more than I can even express,” said Alison “When you say Jimmy’s name and you see his face you are actually, everybody is, actually honoring his only request before he was killed … to not be forgotten.”

It turns out, Busch knows more about the pain these families go through than he lets on.

“His wife Alicia and his 1-year-old baby boy Seth were killed by a drunk driver many years ago,” said Alison. “He was aboard a submarine and he couldn’t come right home either. So he knows what it’s like to have to go through the horror of all this.”

Because he was out to sea, Busch wasn’t able to get back in time for the funerals.

“That’s a weight that he carries with him,” said Alison. “To be able to do all this for so many people — and those of you who run races know it can really beat your body up. He’s not a young man anymore and he still continues to do this. [It’s] nothing short of amazing and should be honored and recognized.”

Busch and the Malachowskis plan to get together for the first time this weekend. After the race, Busch said, he intends to put the medal he’ll get for running along Jimmy’s headstone at Arlington National Cemetery.

“I already told the Marine Corps Marathon that my goal is to finish,” said Busch. “I’ll go as far as I can until they pull me from the course.”

While running this race one last time might mean a lot to Busch, it clearly means even more to Alison Malachowski.

“It’s pretty remarkable,” she said. “He’s definitely a national treasure and a hero to me and all of us for doing this.” 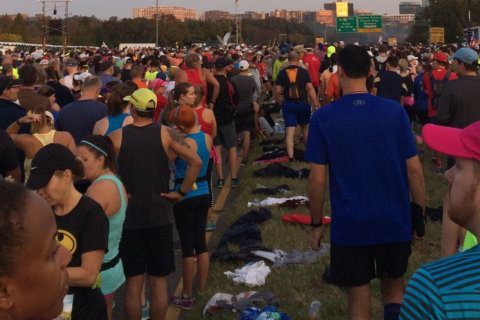