Truth be told, Robert Widmer, of Odenton, Maryland, isn’t much of a runner. His hobby is ice hockey, though even that’s something he got a late start on. But that's a common thing among the Washington Ice Dogs. And Widmer isn't the only one who's running.
Listen now to WTOP News WTOP.com | Alexa | Google Home | WTOP App | 103.5 FM

WASHINGTON — When 50-year-old Robert Widmer of Odenton, Maryland, runs the Marine Corps Marathon this weekend, he plans to “start slow, and then taper off.” Truth be told, Widmer isn’t much of a runner. His hobby is ice hockey, though even that’s something he got a late start on.

But most of the Washington Ice Dogs sign on to the sentiment “better late than never.”

Widmer didn’t even learn how to ice skate until he turned 40, when he decided to start playing after he was several drinks into a Christmas party with friends. He learned how to play goalie because that’s the position that always looked fun on TV.

And after a “skate-a-thon” fundraising event at the Piney Orchard Ice Rink last year, he was approached and agreed to start spending his Saturdays from September through March as a volunteer assistant goalie coach — “coach-ish” is the term he used — with the Ice Dogs, a hockey team composed of players with special needs.

Those disabilities, be it mental or physical, will vary from player to player.

“They’re all different,” Widmer said. “They’ve all got different issues of some sort, but in the end it’s hockey. And they all seem to enjoy it; they all get on the ice; they have fun.”

“It doesn’t matter” is the phrase he seemed to repeat the most before an early-morning September practice.

The Washington Ice Dogs draw players from around the D.C. region. They aren’t the only squad that caters to players with special needs, but the Ice Dogs are one of the few that fields an “A” team for players with advanced skills. That’s what brought Elias Tsakiris to the Ice Dogs from the Montgomery Cheetahs. 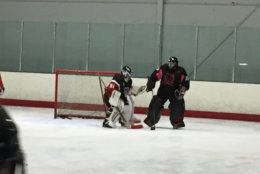 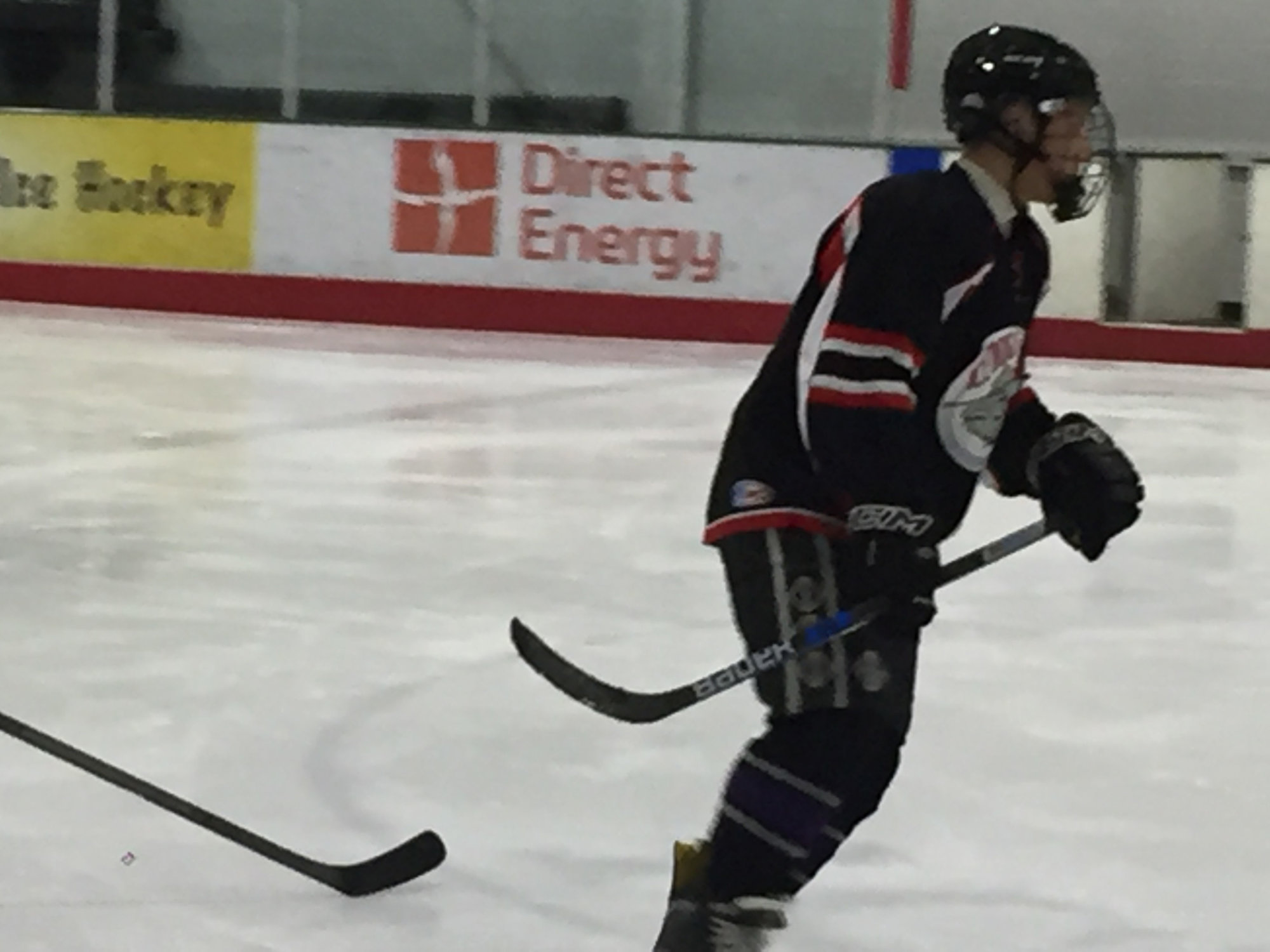 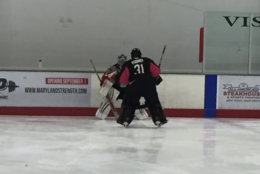 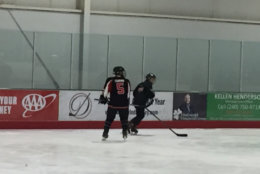 “I really loved them and stuff,” said Tsakiris, who played with them for more than a decade growing up. “They have an ‘A’ team here, they have an adult team, and I really like doing it.”

He’s 22 now, and he plans to at least start running the marathon with Widmer.

“It’s going to be wonderful as I work my butt off,” before adding “for as many miles as I can run.”

Widmer, on the other hand, plans to finish, even if it means using up most or all of the seven hours allotted to the slowest runners. He’s rather nonchalant about it all, admitting last month he probably wasn’t training as seriously as he should have been. But while he downplays the effort he’s putting into the race, or the difficulties the players he works with face, he lights up when he gets to tell stories about the achievements of the guys on the ice.

‘I just see the smiles on their faces’

As a rec league hockey player who couldn’t even skate 10 years ago, Widmer loves to tell stories about the guys who play on the Ice Dogs’ “B” team, and seeing their progress in the sport he loves. One of them was Phillip, who started off last year just pushing a goalie net around the ice at the Gardens Ice Rink in Laurel.

“It’s the people” who make the Ice Dogs so special, said Widmer. “There’s one kid, Will, he’ll plant himself in front of the net and he just sits there and shoots, shoots, shoots.”

Then Widmer started making Will skate to some pucks further away from the net.

“He was around center ice, and he had the puck and I was in the net and the kids were just shooting at me and having fun,” said Widmer. “He’s skating in and it must have been five minutes later, he finally gets up to the net so I slide over and square up to him.” He makes the sound of him sliding and stopping, his skates making ice go flying. “And he looks up and got all excited. ‘And he shoots and he scores!’ and he was all excited. So stuff like that is really, really cool and really rewarding.”

Those moments come with a cost. Ice time is expensive, so everyone who coaches with the team is a volunteer. The Ice Dogs are a nonprofit, and any money they raise is used to get players on the ice and in the handful of tournaments they play in every year. The team makes clear it doesn’t want cost, which is substantial in hockey, to be a deterrent.

“It means a lot,” said Tsakiris. “It means more ice skating and stuff, and also it means putting pucks into the net and trying to shoot them.”

But while he gets excited about the special moments, the special needs generated by whatever disability an Ice Dogs player might have is quickly overlooked.

Widmer said he doesn’t always know what’s been hampering the players he’s worked with. On the ice, he doesn’t care. “I just see the smiles on their faces.”

On the ice, “they don’t know they have a disability or anything,” he said. “Everybody has physical and mental — they say people are like on a spectrum or something, and I think everybody is on the spectrum at some point. It’s not that they’re any different — they may be a bit farther than others, but they want to go out and play hockey and have fun.”

He adds, “Whatever the issue is, it doesn’t really matter. You deal with what you have and you go.”