After being closed since May 4, traffic will soon be trickling on Virginia’s Route 9 through the tiny town of Hillsboro in western Loudoun County, with a partial reopening of the road that typically carries 17,000 daily commuters from West Virginia and Maryland.

Route 9 has been completely closed for three months to facilitate work on the town’s traffic-calming and pedestrian safety project on the less than 1-mile stretch of two-lane state highway through the historic town.

Starting Friday afternoon, single-lane traffic is allowed through the work zone westbound during the weekend, with the resumption of one lane of eastbound commuting traffic Monday morning.

Hillsboro Mayor Roger Vance said the partial opening will benefit people heading to 22 local wineries and breweries on weekends, but this won’t be the preferred choice for the bulk of morning commuters.

“Your best bet still remains the regional detour on West Virginia Route 340 and Virginia Route 7,” Vance said. “The partial opening will be through an active work zone — the roadway conditions will be variable on any given day.”

With largely unpaved roads surfaces, Vance said speeds will be reduced to 10 to 15 miles per hour.

Hillsboro and the Virginia Department of Transportation opted to take advantage of low traffic volume during stay-at-home orders associated with coronavirus. In May, they began the most intrusive aspect of the project earlier than planned — total closure of Route 9 within the limits of the town, which has a population of fewer than 100 people.

Now, nearly two months ahead of schedule, two major aspects of the effort to provide a smoother commute are in place.

“The east and west roundabouts will be operational,” on either end of the town, Vance said. “And, the traffic signal on Route 9 at 690 will no longer be functional.”

It’s been the bane of 17,000 daily commuters on Route 9 through tiny Hillsboro, Va. The traffic light in the middle of town is GONE. Friday afternoon starts a PARTIAL reopening of ⁦@ReThink9VA⁩ — one lane thru the work zone. New roundabouts in place. ⁦⁦@WTOPtraffic⁩ pic.twitter.com/doVj8byKRi

Although the town has worked to provide signage for detours to local businesses, the partial opening will allow more direct access.

“The partial opening is really to accommodate visitors to the area, heading out to the wineries,” Vance said.

Beginning at 2 p.m. on Fridays, a single westbound travel lane will be opened and remain open through 5 p.m. on Sundays. On Sundays at 6 p.m., the one-lane eastbound will reopen to facilitate morning commuters from 4 a.m. to 9:30 a.m.

Each weekday after 9:30 a.m., Route 9 will be closed until the following morning to allow construction for an extended period during a day. 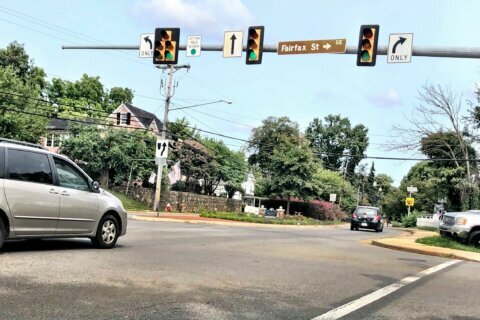