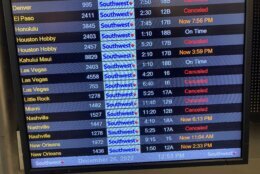 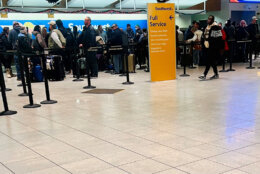 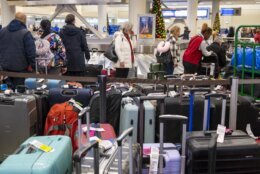 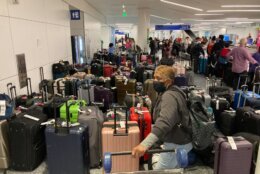 Passengers across the U.S. were stranded Tuesday morning after Southwest Airlines canceled thousands of flights, including trips out of BWI Marshall Airport in Maryland.

As the new year approaches, Southwest is struggling to recover from blistering winter weather that left the airline facing operational challenges.

Edward Russell, editor of Airline Weekly, told WTOP that the provider’s situation was uniquely impacted by a number of factors that had a ripple effect across its schedules.

“What happened was crews and planes got out of place and Southwest system old technology systems that schedule those crews and planes and they lost track of where people work. And that’s what we’re seeing the result of over this week,” Russell said.

He added that, without knowing the specifics of the system, Southwest’s software issues have remained a critical issue for customers.

“Southwest has been investing a lot of money in recent years to install new systems but mostly on the customer-facing reservation side of things,” he said. “So clearly, the investments have not gone to the crew and the aircraft scheduling side. And that’s in desperate need.”

WTOP’s Dimitri Sotis asked Russell about comments that the airline was “fully staffed and prepared for the approaching holiday weekend when the severe weather swept across the continent.” While the airline has only begun recovering from these operational challenges, he said that the organization just wasn’t ready for the ramifications of the weather.

Southwest plans to operate on a reduced schedule for the next several days into New Year’s Day, flying roughly one-third of its flights. Addressing customers’ long wait times while trying to reach agents on their customer service line, Southwest suggested, “If you need to reach us urgently, you may continue to call.”

Greenberg said there is some weather causing cancellations and delays, but that’s not the major issue here.

“If you look at the stats by airline you can’t blame it on just weather,” Greenberg said.

He said American Airlines had 5% of its flights canceled while Southwest had 70%.

“It takes you a minimum of 36 hours to get your flights back in sync,” he said.

Southwest CEO Bob Jordan issued a video apology via Twitter on Tuesday evening, saying he has “nothing but pride and respect for the efforts of the people of Southwest who are showing up in every way.”

“The tools we use to recover from disruption serve us well, 99% of the time,” Jordan said. “But clearly, we need to double down on our already existing plans to upgrade systems for these extreme circumstances so that we never again face what’s happening right now.”

On the heels of wide-scale disruptions, we’re working diligently to Safely recover our operation & accommodate displaced Customers & Crews. We know this is unacceptable & sincerely apologize. If your travel was impacted, explore self-service options here: https://t.co/B6L8HR9Yqc pic.twitter.com/mLWndYMned

WTOP reporter Nick Iannelli is among the thousands of customers experiencing the holiday nightmare firsthand after being stranded in Milwaukee, Wisconsin, while visiting his parents for Christmas.

“I’m one of those people who just checked. Let’s see if it’s on-time, nope, it’s canceled. Got no notification,” said Iannelli as he prepares for the drive back to the District.

He had planned to pick up a rental car at 8 a.m. but was told the wait would be at least an additional four hours before a car would be ready.

Line for rental cars at Milwaukee’s airport right now. A guy just yelled profanities at the cashier and threatened to shoot people here “in the head.” And then he stormed out. Yikes. pic.twitter.com/K0wT9MB19e

“On the other side of this, we’ll work to make things right for those we’ve let down … our heartfelt apologies for this are just the beginning,” the airline said in a statement, while calling the impact on customers and employees significant and unacceptable.

The Department of Transportation called the cancellations unacceptable and plans to look into whether the airline is following its customer service plan.

Brandon Awa had planned to head home to Minnesota so that he could work Wednesday. His flight was canceled, and he said the airline told him that the next available one isn’t until Saturday, New Year’s Eve.

“I’m just upset a little bit because before coming here the weather was really bad, and they almost canceled the flight,” Awa said.

Now, he said he’s out of alternatives besides waiting for the next available flight.

Brandon Williams has had three flights canceled since Christmas Eve. Most recently, his 7:30 a.m. trip home to Albany, New York, was canceled Tuesday.

“There’s no inclement weather impeding the progress of the fights taking place,” he said. “It’s just really staffing and not having the adequate [number of] people able to get here to work these flights.”

Williams said the airline gave him a voucher for a free fight.

“But who’s to say that down the line when we want to use it that doesn’t get canceled, too?” he said.

The Associated Press and WTOP’s Acacia James contributed to this report.