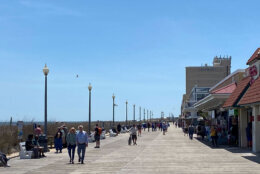 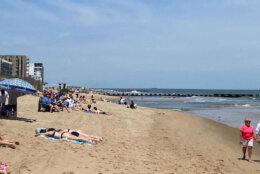 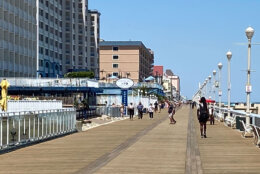 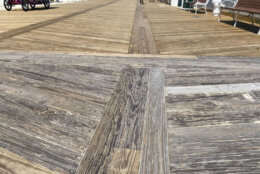 It might not look like it yet, but summer unofficially begins this weekend. For those visiting the Delmarva beaches, they can’t wait for it to arrive.

“Last year we ended up having the busiest summer we’ve ever had,” said Ocean City Mayor Rick Meehan. He said they set records for revenues and numbers of visitors. “It was just a terrific summer.”

And this year, Meehan said, early reservations are up even from there.

There’s similar optimism in Delaware too, where vacation rentals are still available, but not as many as there usually might be right now.

“It looks as though we are going to be having an even bigger year, if that’s possible, than 2021,” said Carol Everhart, the head of the Rehoboth Beach-Dewey Beach Chamber of Commerce. “We broke all records in 2021.”

Everhart said that the real estate companies — and the statistics — are leading her to believe this summer will be even bigger. One reason: remote work is allowing some people to extend their stays at the beach.

Town leaders in Rehoboth are well aware that the sand and the surf are the main selling points, but that long, continuous rain storm that drenched the region earlier this month means there’s a lot more surf and a lot less sand along some of Delaware’s beaches.

“We had a lot of beach erosion so a lot of that depth of the beach is gone,” said Rehoboth Beach Mayor Stan Mills, especially in the center and north of town.

Mills said they’re working with the state Department of Natural Resources, but that they’re “actually focused on a beach south of us that’s in worse condition, so it’ll be a little while before they come to us.”

That storm, triggered by a nor’easter offshore, washed away 50 to 75% of the sand that typically spanned between the water and the boardwalk there. A popular beach at the Delaware State Seashore Park near the Indian River Inlet is also considerably smaller than it used to be.

That’s going to cut into the number of people on the beach, especially at high tide, and more families and sunbathers will head to the northern and southern ends of town. But even if the beach is the main attraction, Mills said, it’s not the only one.

“We’ve got other assets and reasons why people come to the nation’s summer capital,” said Mills. “That is to enjoy shopping at over 200 business fronts that include boutique stores and spas. Also they can go to any of our 100 eateries.”

Rehoboth won’t go so far as to close off streets to cars and let restaurants take up entire sidewalks anymore, but some sidewalk space will still be available for tables, provided pedestrians can still traffic through, Mills said, adding, “The patrons love it.”

In Ocean City, there are some new things happening this year.

“We’re bringing professional bull riding to the beach the first weekend of June,” said Meehan. A small stadium will be built at the inlet parking lot “and bringing in the bulls… overlooking the Atlantic Ocean.”

That’s happening during the Jellyfish Festival a few blocks away, which celebrates live music and craft beer. A week after that is the annual Ocean City Air Show, which will include the Air Force Thunderbirds this year.

Other free events include family movie nights and Sundaes in the Park, which features live music, fireworks, and of course, ice cream sundaes. And about half of the boardwalk has been replaced, with the rest to be updated after this summer.

“It feels different,” Meehan said. “You’ll notice it right away. You can really tell when you cross over from one to the other.”

It’s still all wood, though. “Hey, it’s a boardwalk,” said Meehan. “It’ll always be a wood boardwalk in Ocean City.”

The town is also expanding the hours for bicycles on the boardwalk — starting this year, it’s 2 a.m. until noon.