Fox populi: Biologists on whether there are more red foxes in our region

Red foxes have made headlines in the nation's capital — and not in ways that endear them to humans.
Listen now to WTOP News WTOP.com | Alexa | Google Home | WTOP App | 103.5 FM
(1/3) 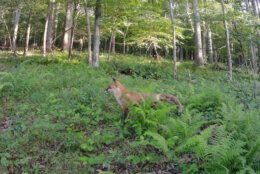 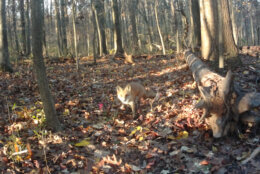 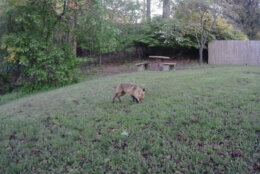 Red foxes have made headlines in the nation’s capital — and not in ways that endear them to humans.

In April, one fox chased and bit nine people on Capitol Hill. That fox — a female with three kits — was euthanized so a rabies test could be done. The fox tested positive for the disease. Because her kits had likely been exposed to rabies, they were also euthanized.

Then on May 3, National Zoo staff reported that a red fox had chewed its way through a metal mesh barrier and killed 25 flamingos and one duck in their enclosure.

The incidents raised questions about whether fox populations are growing in the area, and whether the animals pose problems in urban and suburban settings.

When it comes to the fox population, Joshua Tabora, a biologist with Maryland’s Department of Natural Resources, said “foxes are abundant” in the region, and the population is stable. Tabora added there are “no notable increasing or decreasing trends” in their numbers.

Jennifer Mullinax, an assistant professor with the University of Maryland’s Department of Environmental Science and Technology, agreed with Tabora: “I don’t have data to say that we are seeing an increasing population right now,” she told WTOP.

But Mullinax is involved in a five-year study that will include fox populations, and that answer could change.

Mullinax said camera traps have been set up in 60 locations in Montgomery County.

“Every single county park has a really healthy fox population,” said Mullinax. “We will be calculating fox density for two of the most urban parks,” in Montgomery County.

If the number of foxes isn’t increasing, Tabora and Mullinix say there are likely other reasons that explain more frequent sightings of the animals.

“Some of that may be attributable to an increase in things like Google Nest cams or Wi-Fi-enabled security cameras,” said Tabora. “This technology is enabling us to get a window into animals that are pretty cryptic and secretive.”

Mullinax backs up that theory. Not only do home security cameras make observing wildlife easier, but the availability of trail cameras, used by hunters, biologists and wildlife photographers, has become more widespread and affordable.

“You can get a really nice camera for less than $100,” said Mullinax.

The pandemic also played a role in the sense that the number of foxes is growing, Mullinax said: “People were home, and in their yards, and they were just generally documenting wildlife more.”

The headline-generating behavior — attacking humans and the killing of so many flamingos — are rare events, said Tabora and Mullinax.

“Foxes naturally want to avoid people, they kind of view us as a threat to their safety,” said Tabora.

“The likelihood of having a negative encounter or being bitten is extremely low,” Mullinax added.

Both biologists said that if you spot a fox in the wild, or your own backyard, it would not be abnormal for the fox to pause and size you up, before moving away.

“I would only expect a fox to approach a person if it’s been compromised in some way,” said Tabora.

If the fox moves toward you without hesitation, and appears disoriented, that could be a sign the fox may be infected with rabies.

He adds that the common belief that foxes spotted in the daytime are likely rabid is incorrect. While they most often hunt at night, they have been known to expand their hunting hours, especially females with kits.

“They have a higher caloric need, and they can be active in the daytime to fill that need,” said Tabora.

Another reason a fox may approach humans is because it’s become accustomed to being fed.

“A lot of people feed wildlife, and it’s so detrimental to the wildlife population,” said Mullinax.

Just because they live in proximity to humans doesn’t make foxes a threat. Tabora suggests people “think of human space as wildlife habitat as well, and that there’s ways for all of us to coexist.”

Mullinax said having foxes in the neighborhood does bring benefits.

A large part of their diet consists of mice, which serve as hosts to ticks that spread Lyme disease. By dining on mice, foxes provide a “public health service,” said Mullinax.

When seeing foxes on local trails or backyard gardens: “We should be excited to have a glimpse into that wild world,” Mullinax added.