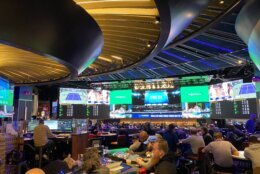 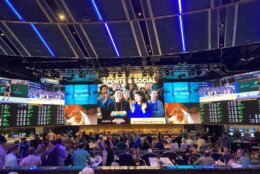 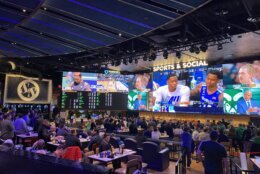 For the first time, sports fans in Maryland can bet on the NCAA Tournament legally. At Maryland Live! at Arundel Mills, dozens of kiosks and betting windows were packed with sports fans doing just that.

Through the first half of the first day Thursday, more than 6,000 wagers had already been placed, putting the venue on pace to see more than 10,000 wagers on the day.

“We’re seeing exactly what we thought we were going to see, if not better,” said Bruce Bilek, the general manager of the FanDuel Sports Book at Maryland Live!

The wagering started early, and by the time the games tipped off, the tables that hadn’t been reserved were all spoken for, so fans could watch the action on the 140-foot long video board.

“Days like today, you do have to pay a little bit to spend the whole day here and enjoy; but as you can see, there’s not an empty seat or table,” Bilek said. “This is what March Madness is all about.”

Normally in a sports bar, people can’t wait to talk sports with even random strangers, but stick a microphone in their faces and some will hesitate until they realize there’s no camera.

“I’m supposed to be working,” one fan said.

Others made it a work event.

“It’s like being at a game; it’s wild,” Shaun Tindsley, of Ellicott City, said. “There’s a lot of people. A lot of noise. I like it. The atmosphere is excellent.” With a huge stack of betting slips in front of him, he said this was going to be his new March Madness tradition.

WTOP contacted lottery associations in D.C., Maryland and Virginia to see how much action the region was expecting on the games, but that information wasn’t immediately available.

But Gunther said it’s not fun to lose his own money: “Hopefully that hasn’t been the case just yet.”