Much of the Interstate 95 corridor, including D.C. and Baltimore, is under a tropical storm warning as forecasters eye heavy downpours and powerful winds from Isaias, which has made landfall near Ocean Isle Beach, North Carolina, the National Hurricane Center said.

The National Hurricane Center’s latest forecast has Isaias — pronounced ees-ah-EE-ahs — cutting north across the Chesapeake after landfall in the Carolinas, with the D.C. area eyeing up to 6 inches of rain from around 11 p.m. Monday until Tuesday afternoon — with a risk for flash flooding and power outages.

Metro has activated its severe weather plan due to potential impact in the region. Metrorail, Metrobus and MetroAccess service will operate on a normal schedule.

Riders are advised of the potential for weather-related delays and service adjustments, and those who must travel should allow additional travel time. 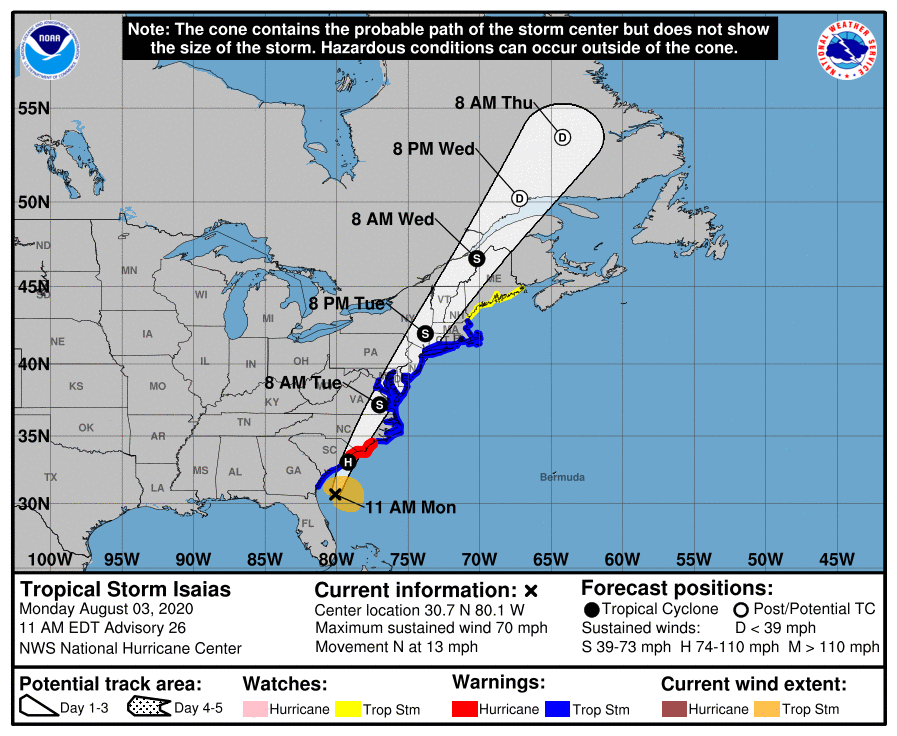 The No. 1 impact from Isaias, like so many tropical systems that have impacted the D.C. region before it, will be a substantial flood risk.

Monday evening’s commute was spared the worst, since Isaias’ heaviest rainfall won’t overspread the area in earnest until around midnight. After that, though, highways, parking lots and other flood-prone areas are likely to get swamped rather quickly.

“In mountain areas, destructive runoff may run quickly down valleys while increasing susceptibility to rockslides and mudslides. Flood control systems and barriers may become stressed.”

By dawn Tuesday, confidence is increasing that Virginia, Maryland and D.C. from the Blue Ridge eastward will be under the brunt of a large but fast-moving tropical storm.

Strong winds will be of greatest concern for coastal southern Maryland and the Eastern Shore, where forecasters said gusts could be strong enough to damage porches, awnings, carports and sheds.

Trees could be uprooted throughout the region, leading to blocked roadways and scattered outages.

Isaias is expected to bring a significant amount of rain and heavy winds to the region, and local flood-prone areas are gearing up and urging residents to stay aware.

He is asking residents to pay attention if rain from Isaias starts to get heavy.

“If we are going to see some flooding, only a foot or two of water can slip the vehicle, and you can be knocked down by only 6 inches of water,” Rodriguez said.

He had also advised District residents to sign up for real-time updates from AlertDC.

D.C. coronavirus testing sites, as well as several in Virginia and Maryland, are closed on Tuesday in anticipation of bad weather.

Emergency managers are coordinating with utility companies to minimize service disruptions. Work crews spent the weekend clearing storm drains in advance of Isaias, but officials are still advising residents to stay clear of the roads in anticipation of high water.

Ray Whatley, acting emergency manager for the city of Alexandria, Virginia, said they’ve been warning and helping those at the end of King Street, which has seen extensive flooding before. Storm preparation included bringing in tables added for outdoor dining during the pandemic.

“We’ve been trying to advise them that, ‘Hey, this might be a little bit more than normal,'” Whatley said.

Free sandbags are being handed out as crews go door to door to area businesses and residents in areas known to flood.

And, in addition to keeping electronics charged, Whatley said to prepare for the coronavirus pandemic as well for those who might need to travel outside of their homes.

“Have a couple of face masks handy and have medications available,” he said.

Ellicott City, Maryland’s Main Street is preparing for the worst as the area is still recovering from recent floods.

The area is still recovering from devastating floods in 2016 and 2018. The Ellicott City Safe and Sound project has removed 12 tons of debris from streams in the watershed over the past year and a half to help prevent flooding in the area.

“We’re always working to prepare for that next storm,” Ball said.

An additional challenge is the increase in outdoor dining from the pandemic, creating additional obstacles to clear.

“Don’t underestimate this storm. It’s better to be over-prepared than ill-prepared,” Ball said.

“The city of Annapolis is surrounded by water, so we get flooding on a sunny day,” Mandell said.

In anticipation of flooding, Fairfax County, Virginia, is providing sandbags for residents, as is Chesapeake Beach, Maryland, which also announced the closures of Bayfront Park and the Chesapeake Beach Water Park until Wednesday.

“Please don’t let your guard down just because Isaias is no longer a hurricane,” said Russ Strickland, executive director for the Maryland Emergency Management Agency, noting that even a slight shift in Isaias’ track could bring the deluge into western Maryland.

“Be prepared for potential power outages, flash floods and tidal flooding. This is still a dangerous system.”

In addition to a standard emergency kit with essential medicines, fresh water, batteries, and flashlights, officials remind those in the region to add spare face masks, sanitizing wipes and other cleaning supplies to their storm checklist due to the coronavirus pandemic.

Power companies are also preparing for the impact of the storm. Dominion Energy said it has crews and equipment already staged across its Virginia and North and South Carolina service areas, and it is preparing for power outages that could take days to restore.

Pepco has been preparing for the storm since last week and has brought in more repair crews and extra customer service representatives to answer calls about emergencies and outages.

Read more: What should be in your emergency kit

Isaias is just the latest in a marathon of early-season storms. The average Atlantic hurricane season sees about 12 named systems and six hurricanes, mainly from June to November — but 2020 is trending hyperactive.

“This is the ninth named storm of the season. Usually, we don’t hit number nine until we get deep into September,” NHC spokesman Dennis Feltgen told WTOP. “This is already the second hurricane of the season. It was supposed to be active, and it’s certainly coming out that way.”

Before the season started, the National Oceanic and Atmospheric Administration’s Maryland-based Climate Prediction Center forecast between 13 and 19 named storms this year, with between six and 10 becoming hurricanes, and three to six going on to reach Category 3 intensity.

NOAA is set to issue a revised forecast this Thursday — and Feltgen said it’ll likely reflect the early-season burst of activity.

Isaias already has caused destruction in the Caribbean: On Thursday, before it became a hurricane, it uprooted trees, destroyed crops and homes, and caused widespread flooding and small landslides in the Dominican Republic and Puerto Rico.

One man died in the Dominican Republic. In Puerto Rico, the National Guard rescued at least 35 people from floods that swept away one woman, whose body was recovered Saturday.

WTOP’s Valerie Bonk, Dan Friedell and The Associated Press contributed to this report.

Monday night: Rain, heavy at times. Lows in the mid-70s.

Thursday: Sunny, with a chance of showers and thunderstorms. Highs in the mid-80s.

Friday: Partly cloudy, with showers and thunderstorms likely in the afternoon. Highs in the mid- to upper 80s. 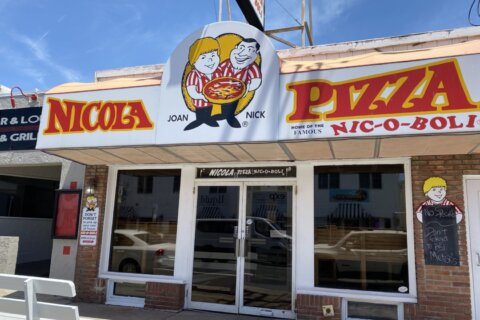